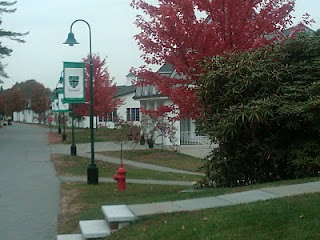 It was supposed to be a balmy 75 and sunny today. Instead, it was a cool, moist 57 in the steady shade. Having visited St. Paul's and Exeter in the spring just passed, we flew into Logan today and made our way first to see alums TJL '08 at Andover and then on to WP '09 at Brooks. Both boys are enjoying themselves thoroughly. My stated goal is to visit all Saint David's alums before they graduate high school. 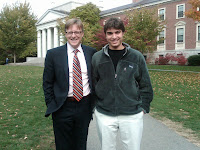 Decisions about ongoing schools can be anxiety producing. What never ceases to amaze us, however, is how well it turns out. These are two different Saint David's boys at two very different New England schools--one 360 in size, the other 1,200, and the boys are thriving. They have both found homes post Saint David's that are challenging them intellectually, artistically and athletically. 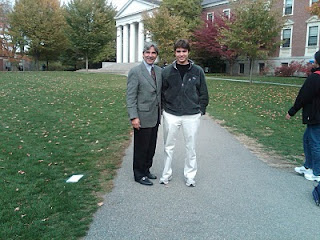 WP is actively pursuing soccer, hockey and Lacrosse. At the same time, he is intimately involved in suggesting to the school that it allow he and others to paint a mural on an otherwise bland piece of wall. He is clearly confident and secure. WP has enjoyed reading "A Long Way Gone" and "In the Time of the Butterflies." Both of which he highly recommends. 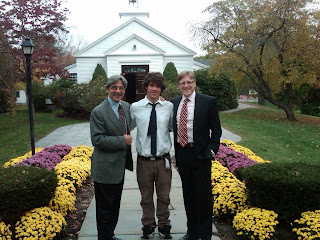 For TJL, he felt well prepared for Oedipus Rex and Antigone, remembering fondly his dramatic performances and study of the same at Saint David's. He is playing varsity squash and golf and is active on the water polo team. Although far from home, TJL feels close to family with his sister at Harvard. He was a charming and engaging host over lunch and discussed the benefits of the Italian Study Tour and its unmatched interdisciplinary focus to date. So enthusiastic, in fact, was TJL, that he hardly had time to take a bite of lunch. TJL has also chosen, after several years of French, to switch to Spanish for "practical reasons." On the flight home, I suggested to Mike that "practical reasons" might have more to do with "the female composition of the current Spanish class;" but we'll never know for sure.
It was clearly evident that TJL too felt confident and prepared, and despite the distance, has maintained close relationships with Saint David's alums in other boarding and day schools. 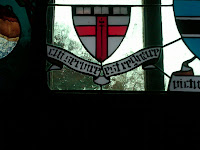 All told our "redux" was a success and we thank our two hosts and their headmasters/heads of school, for spending so much time with us and for welcoming us into their "homes."