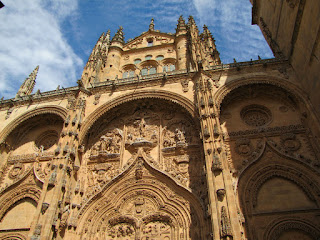 In the school's continuing efforts to broaden the minds and experiences of our boys, we have for the first time, a group of rising 8th grade boys in Salamanca, Spain for a two week immersion Spanish language program.  They left on Saturday, June 11 and will return next week.  Joining the boys are four faculty members each of whom is also immersing him/herself in the language and culture.  It is an exciting trip.  Below is a recent communication I received from the group.

We chose Salamanca, Spain for its history, culture, size and prominence in the teaching of Spanish.  It is a beautiful Renaissance town just a little north and west of Madrid. 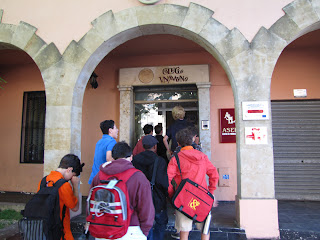 Salamanca is the first of two new travel experiences recently incorporated into our curriculum.  Salamanca joins our existing Ramapo overnight, Cape Cod week-long, and 10-day Italian Study Tour.  The second new addition, a three-day trip for the 6th grade to the nation's capital, will be introduced this coming spring.

"Everyone is doing superbly! In fact, Srta Cotumaccio and I are very impressed with the work the boys are doing in classes and at night for homework and in their journals. The boys who never had any Spanish at all are already writing sentences and the ones who are heritage speakers are preparing short essays for us and their teachers!  The boys who have had Spanish at Saint David's are spending part of class doing vocabulary and grammar work and part of class learning about the culture of Spain such as the "Sanfermines" and the "ferias de Sevilla". All explanations are conducted exclusively in Spanish so they are really listening hard.
"Yesterday, we visited the bullfighting museum and learned about the great contributions of Salamanca to both the breed of "toro bravos" and the bullfighting community.  They told us the best bullfighter ever, Robles, was Salamantino!  We also changed money so everyone is set to buy whatever they need/would like and had lunch out at a restaurant. 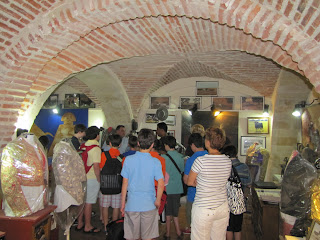 "Today, after lunch, we will be visiting a ham factory so that the boys can learn how "jamon serrano" is made and has become a renowned product throughout the world. It´s very tasty!   Unfortunately, customs won´t allow it in to US unless you are a commercial importer. I¨ll be sure to let the boys who love it know where they can order some.
"A few boys have been getting up extra early to run with Coach Roman along the River Tormes and have really enjoyed the view. We are walking everywhere, up and down the hill into town, so the boys are getting plenty of physical activity. We even have a ping pong table at the residence which they enjoy."