A Human Graph in Algebra

By doing so, the boys formed a line or parabola, part of the solution set of the function.

This exercise allowed the boys to experience how their positions and the shape of the graph changed for different functions, and when each variable of a particular function was altered.

Giving the boys a way to learn kinesthetically helps them conceptualize the algebra underpinning the concepts that they learn later in the classroom. 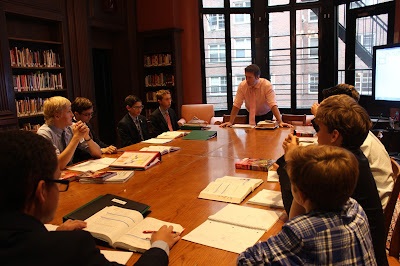 Another great aspect to an activity like this is that when the boys realize they aren't "in line" with the group and have to self correct, it provides an opportunity for co-operative learning. Each member of the group is responsible not only for learning what is taught, but also for helping his classmates learn, creating an atmosphere of supportive, collaborative achievement.