Yesterday morning, our First Orchestra musicians treated their parents to a before school cocoa concert, an open rehearsal led by director Carla Francis. 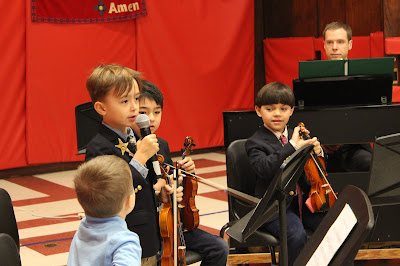 Saint David's First Orchestra program, now in its fifth year, provides an opportunity for violin and cello students in Grades One through Three to experience playing together in an orchestra setting. They perform twice during the year in concerts for their fellow classmates.

First Orchestra is a prime example of the school's commitment to the arts and aesthetics, one of the four pillars of a Saint David's education, and it also builds the confidence of our younger boys as they gain comfort performing and speaking in front of an audience of parents and peers.