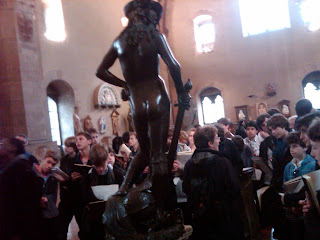 Rain threatened again today; but again it held off until late in the afternoon.  Day otto found the boys waking early, eating breakfast and after chapel making their way to The Accademia and The Bargello.  The afternoon was spent playing sports--football, soccer and catch--in the drizzle.  It was a little muddy, but that's okay.

Above we see a photograph of the boys observing Donatello's David at the Bargello, the third David the boys have seen in situ this trip.  Time for sketching and discussing Michelangelo's and Donatello's David was exercised with great zeal.  The boys' drawing skills have been refined and developed over the course of the trip.  Below is Chris W.'s illustrations of Verrocchio's and Donatello's David.  Confidence has grown significantly and the proof lies in the impressive product. 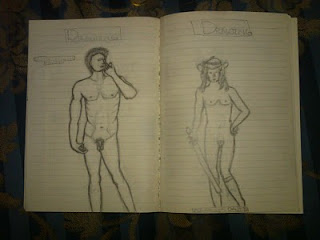 Below is a "sideline interview" with a player from today's sports period--riveting entertainment.  Don't miss it!  You'll get a full accounting of the ebb and flow of today's game, including a few highlights and an inside perspective on many of the difficulties encountered by the players--difficulty identifying who was on what team, the slippery, muddy pitch, et cetera--on account of the complicating weather pattern that has settled itself over Firenze.

Tomorrow promises to be another great day--our last.