April 04, 2012
Tonight we spent a fascinating evening inside Gracie Mansion.  I am not sure we could have had more beautiful spring weather.  Hosted by the Conservancy and sponsored by our Alumni Parents Council, the event was the 5th in a series of social/cultural gatherings aimed at building the links between our current and extended Saint David's School community.  Previously, we have held this annual gathering at the Metropolitan Museum of Art for a special viewing of the then new "East Asia Exhibit," The New-York Historical Society for a behind the scenes look at “Grant and Lee,” The Park Avenue Armory’s “Veteran’s Room” with an up-close critique of the architecture of the Room and the City through the eyes of Stanford White, and last year, the George F. Baker Houses. 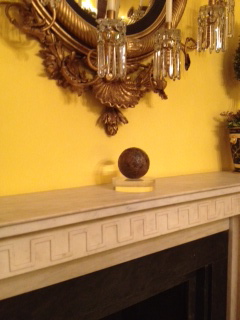 Docents took guests for tours of the mansion throughout the evening.  One of the most interesting artifacts I came across was this 12 pound cannonball sitting on the mantle in the main parlor.  It's a British cannonball fired on what was then known as the Walton house.  The house at the time was occupied by Washington's troops as a headquarters and gun battery for the "American Colonials" protecting the north east section of the island where the East River and Hells Gate join.  The British, encamped in Queens just across the East River, bombarded the house in September of 1776. The Walton House was completely destroyed. This solid iron cannonball was excavated from the property during the 1980 restoration of Gracie Mansion.

It was after the war that Gracie purchased the property and built his country house, which at the time was some 5 miles outside "New York City."

The evening, attended by some 190 alum parents, alums, faculty and staff, was enjoyed by all.