October 22, 2012
Loomis '12 and Henry '12 stopped by my office today to say hello.  In addition to the Surf Club, Loomis is active in JV Soccer at St. George's, playing with what he describes as an "exceptionally talented" team.  He's particularly enjoying the amount of time he has during the day to study, read and complete school work. 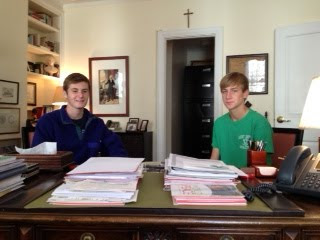 Henry too, is enjoying soccer, this time at Blair, and mentioned that he could have joined the Young Republican Club and received a beautiful fleece pullover; but decided the line was just too long.  Henry is most surprised by the amount of friends that one can make in such a short period of time.


Both boys seem to be enjoying freshman year.  It was fun to see them.