July 14, 2014
Horizons at Saint David's is part way through its third summer.  We have 50 rising First, Second, and Third Grade boys from four schools in Harlem participating in the program this year.  Two thirds of the boys are here for their second or third summer, with one third here for their first.  Following are some highlights to date:

The third graders are now receiving two hours of swim instruction per week (first and second continue to receive 1 hour).

Horizons has developed a strong STEM strand in the curriculum this year with first graders studying the weather and water cycle; second graders learning about computer programing through “Bee Bots"; and third graders constructing their own rockets with stomp launchers.  Through this process the boys are becoming familiar with the design cycle and how mistakes provide the perfect opportunity to redesign and adjust.

Long-time Saint David's teacher and Horizons music teacher, David Bell, has written a new Horizons song to unite and celebrate the program.  The boys have been singing it with gusto.

This year, the program introduced a new morning meeting on Fridays where boys from each class receive the “Horizons All Star” Award.  The award recognizes and celebrates a specific contribution made by a few of the boys each week.

There are several field trips planned, including the Guggenheim, Met, Jewish Museum, and Museum of the City of New York.  The boys will also be visiting Marymount for their production of Peter Pan and Mulan, and to visit their “Fab Lab.”

A highlight of the program this summer includes the participation of six young alum volunteers, up from four last year.  One of the aims of the program is to bring young alums back to Saint David's in the summers to contribute to the greater common good by volunteering their services.  Nicholas, Justin, Cooper, James, Colin, and John are representing with distinction. 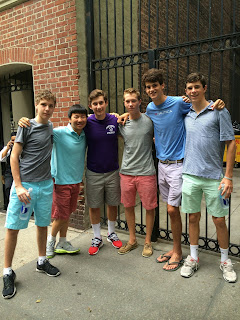 Saint David's is fully alive, even in the summer.