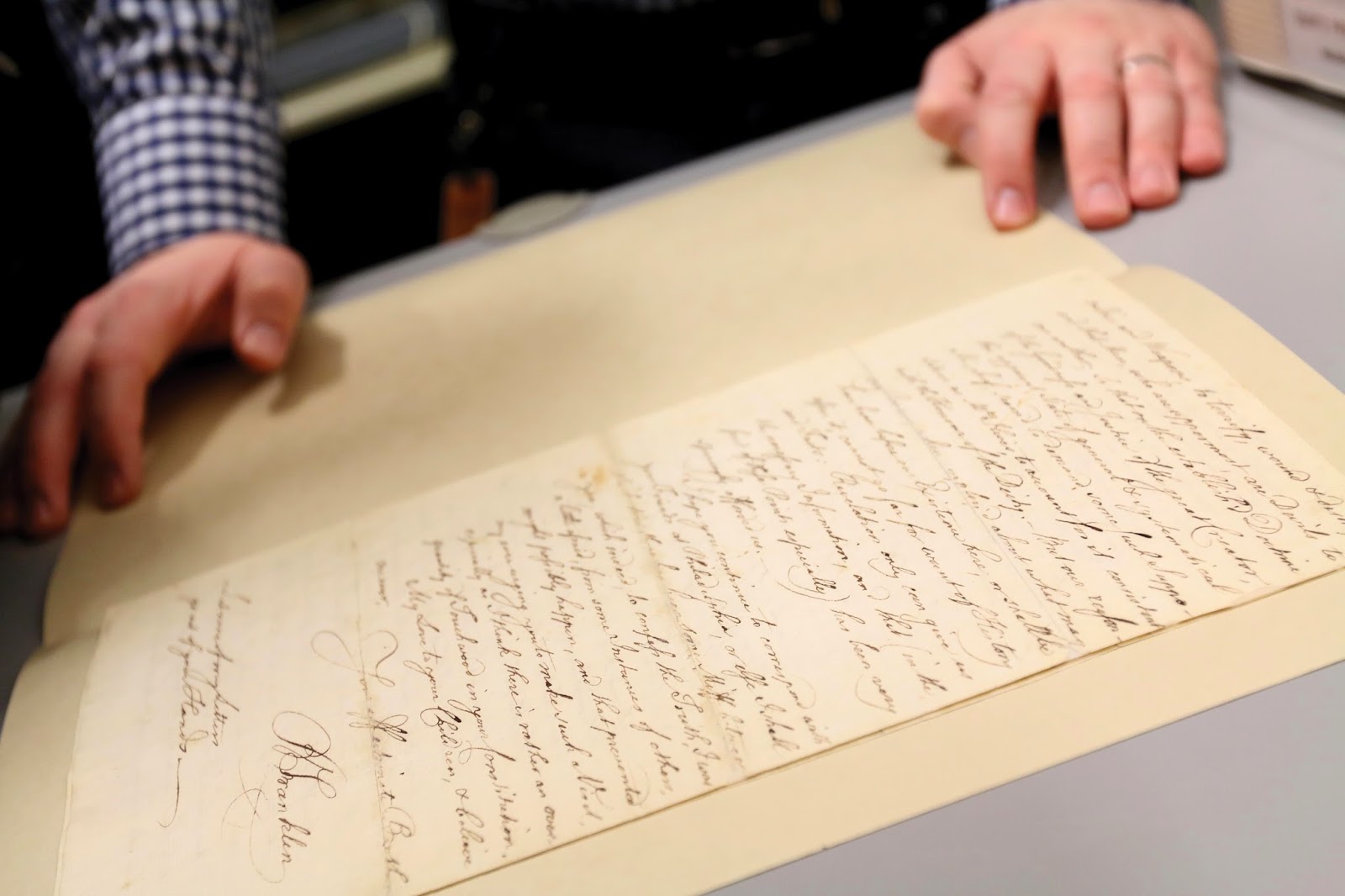 "Wait, this is real too?” asked another astonished Sixth Grade student as we examined Ulysses S. Grant’s presidential razor blade (complete with a permanent blemish from the President’s thumb).

“If this isn’t all real . . . I’m in big trouble,” responded one of the chief archivists of the Gilder Lehrman Collection.

In early March, the Sixth Grade had the rare opportunity to visit the vault of the impressive Gilder Lehrman Collection housed in the basement of the New-York Historical Society.  According to their website, the Gilder Lehrman Institute of American History (GLI) is a “non-profit organization devoted to the improvement of history education.”

It was founded in 1994 by Richard Gilder and Lewis Lehrman who have spent the last two decades adding to the collection of American historical documents, which is now home to more than 60,000 “letters, diaries, maps, pamphlets, printed books, newspapers, photographs, ephemera” (and at least one razor blade).

Gilder and Lehrman have ensured that pieces of American history do not simply collect dust in a random assortment of nooks and attics, but rather that they come alive in classrooms where wide-eyed, budding historians are waiting to dust them off.

Saint David’s recent Curriculum Initiative sought to increase opportunities for boys to expand their learning outside the classroom. The Sixth Grade history curriculum, which is the culminating year in a two-year American history sequence that begins in Fifth Grade, offered the perfect opportunity to take advantage of the primary sources of the GLI collection. Primary sources—essential tools for all historians—are especially important to fostering a passion for history in our boys. Because their content can often be shrouded in difficult language, they offer an immediate challenge to students.

The sources we study were not written during an era of consistent spelling practices or had any knowledge of Times New Roman; they are often either hastily handwritten or permanently smudged over the years.  Primary sources are puzzles that must be unlocked by our boys’ ingenuity and patience. The act of deciphering or translating a primary source immediately makes the process more personal for the boys. They offer a tangible connection to the past that textbooks simply cannot replicate. But while they are more tangible, they often take a greater level of understanding and questioning to fully comprehend than a traditional textbook demands. This contradiction is the key to how we use primary sources in the classroom to promote inquiry-based learning.

There are a multitude of questions to ask regarding a primary source that go beyond the obvious “what does it say?” A few come to mind: Who wrote or created it? Who was the intended audience? What larger historical events was the author experiencing at the time? What personal matters was the author dealing with at the time? What was his or her emotional state? Was it edited or intended for publication? The list goes on. This constant questioning the boys are asked to partake in creates a sense of mystery around each document.

Each answer leads to a new question, a new idea, a new theory. The classroom quickly becomes a buzz of theories about, for example, Jefferson’s true intention behind the preamble of the Declaration of Independence. Suddenly a historical figure the boys see as cemented in history, whose legacy is seemingly already set, is up for debate again. They learn through constant questioning that although the events of history are stubbornly unchanging, our understanding of them is, and should be, constantly in a state of flux. 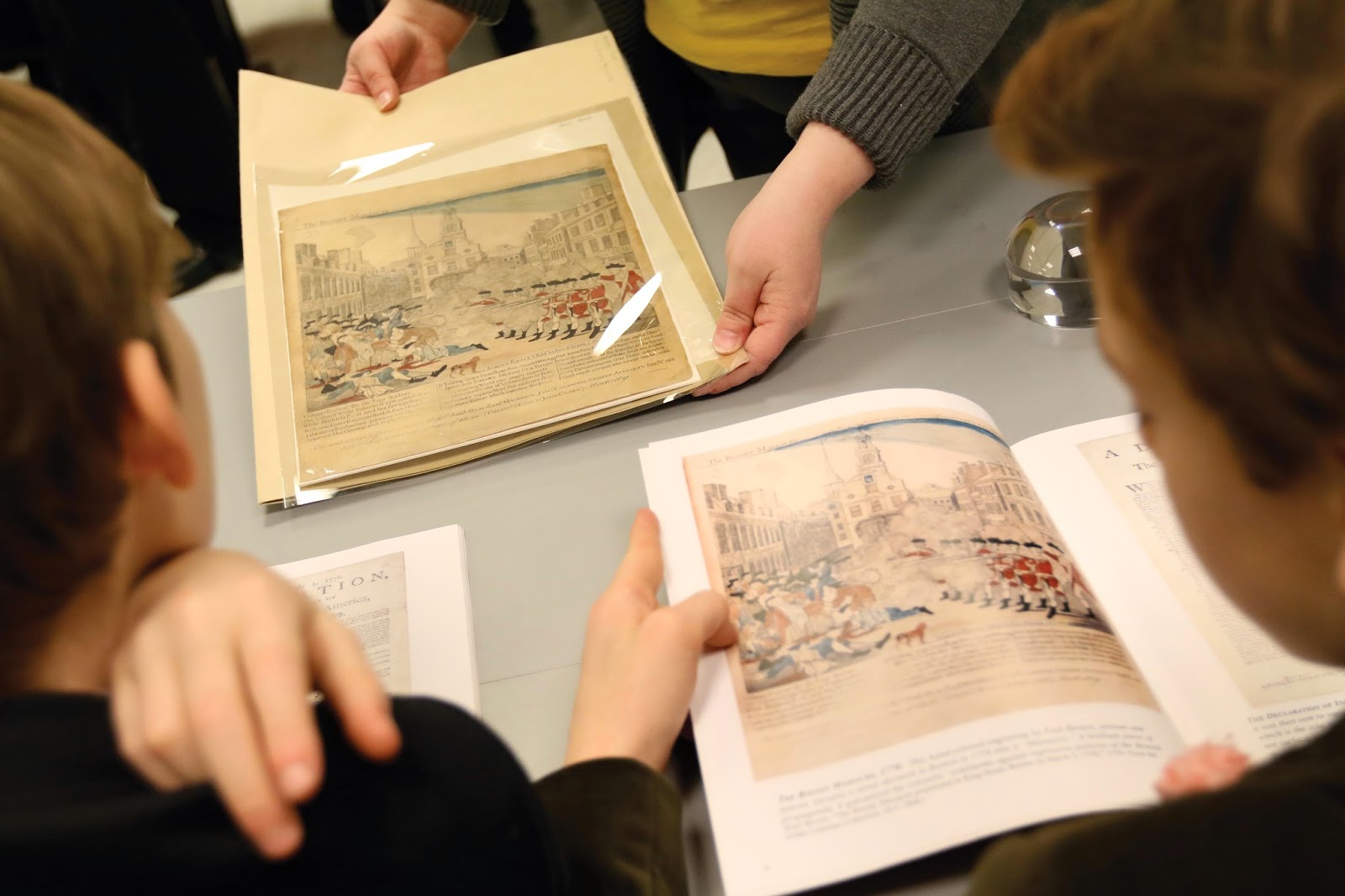 Paul Revere’s engraving that depicts the events of the Boston Massacre is a perfect example of the way a primary source can challenge our boys’ previous knowledge of historical figures and deepen their understanding of larger events.  Before we examined the engraving, I asked the boys what words came to mind when they thought of Paul Revere.  Answers ranged from patriot to hero to accomplished horseback rider.

Boys were stunned that Paul Revere was also an accomplished silversmith and engraver who was capable of creating such an intricate piece of art.  The boys were asked to look at the engraving and point out anything surprising or out of place based on the previous night’s reading on the Boston Massacre.  The boys noticed that the soldiers were smiling, lined up in a battle formation, and being commanded by an officer to fire.

They noted the colonists were well dressed and even had women in their midst.  This was not a depiction of a skirmish started by a particularly rowdy group of colonists armed with snowballs and rocks that the boys had read about.  The last and most important question was “why would Paul Revere make these deliberately misleading choices?” The boys discussed the merit of the choices he made.  It was clear that the colonists needed an event or excuse that gave them the authority to fight violence with violence. By the end of the discussion, we had added even more items to the growing list of Revere’s job titles—manipulator and propagandist. Through the critical analysis of a primary source the boys had a deeper understanding of a time period where individuals’ choices could help incite a revolution.

At our field trip to the GLI vault, we were lucky enough to see an original and hand colored edition of Paul Revere’s engraving. This chance to see an original source that appears on the cover of their core textbook helped humanize this particular event. They were looking at the exact same piece of paper that helped sway colonists from the safety of loyalism to the dangers of denouncing a king and taking on an empire.  Words like “cool,” “sweet,” and “sick” were thrown around with abandon—music to a history teacher’s ears.

The relationship between Saint David’s and the Gilder Lehrman Institute will continue to evolve and grow through numerous endeavors throughout the summer. First, starting on June 23, there will be a one-week camp hosted by the GLI at the New-York Historical Society entitled “The Secrets of the Civil War.”  Rising Fifth and Sixth Grade boys will have the opportunity to investigate a collection of unpublished Civil War letters with the chief curator of the GLI, and present their findings through iBook stories.  In addition, James Hubbard and I will be working on ways to incorporate specific documents that are housed in the GLI vault directly into the Fifth and Sixth Grade history curriculum.

Through this work, we hope to schedule more frequent and in-depth visits to the vault next year for both grades.  Finally, as an affiliate school, Saint David’s has the opportunity to send three faculty members to summer teaching seminars hosted by the GLI that are led by some of the most renowned scholars of their field.  Gwen Kaplan will be traveling to the University of Montana to study the expedition of Lewis and Clark.  James Hubbard will be traveling to the University of Southern California to study the first contact between Natives and early European explorers. I will be staying at Mt. Vernon and learning about George Washington and the Founding Era. Renewing our own passion for learning about history will allow us to foster that same excitement in our students.

Our relationship with the Gilder Lehrman Institute has helped our history curriculum become even more focused on the investigation of primary sources and inquiry-based learning. A history course that utilizes primary sources is not about spoon-feeding content for students to take in and give back, but rather allowing students to struggle and discover answers on their own. Through this process our boys are becoming more critical thinkers and passionate students of history.