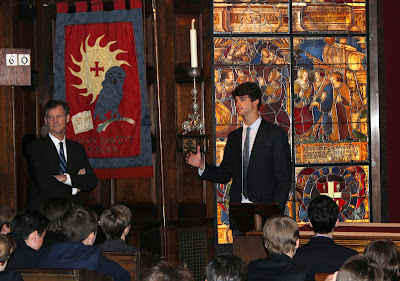 This morning, former Student Council President Colin Johnson '11 and his father, Jim, gave a Chapel talk to our 7th and 8th graders. Both were members of the Saint David's contingent that visited Ethiopia last June for the official opening of the Saint David's Kalina School.

Colin, Student Council President at the genesis of our Dollars for Ethiopia Scholars initiative in 2011, opened the talk by telling the boys about the project's background.

He had been brainstorming with his fellow eighth graders about their class's community service initiative when I suggested building a school in Ethiopia, as a meaningful project to undertake during our school's 60th anniversary celebration. Colin and his student council officers would spearhead the effort, which would entail a multi-year commitment from the school and our boys.

Colin relayed how his initial reticence about such a large undertaking soon gave way to excitement as the fundraising efforts got under way with an extremely successful first year, and two successive years that raised enough for us to complete construction of the first school building in 2013.

He then focused on the trip we we all made in June 2014 to Tigray, Ethiopia, to officially open the school. "It was like a homecoming—there was something waiting, tangible and real, that I had had a hand in creating.  It was an awakening, and finally the distant vision we had set our sights on in 2011 became a reality. When I saw the sign on the side of the Saint David’s Kalina School 'A gift of the Saint David’s School Students, New York City, 2013' I thought about you guys and every Saint David’s boy." 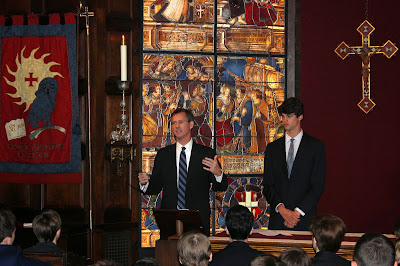 Jim spoke of what had impressed him most on the trip: "how little the people of Ethiopia have in the way of basic goods, running water, and electricity, and yet how happy them seem to be; how excited they were to meet us, talk to us, and share their lives with us." He also was moved by their extreme gratitude for the Kalina School and told the boys in Chapel how much we all can learn from the Kalina community and from a project such as this.

Colin concluded the talk by recounting an interaction he had with a young Ethiopian boy on a flight we took from Meleke to Addis Abba. The 11- or 12-year-old boy was leaving his family to continue an education in the country's capital because schooling in his village stopped after the sixth grade.  Colin observed that despite this difficulty, "the boy was completely content and understood his obligation to his village to make the most of the opportunity that had been given to him. He changed the way I thought about going to school every day, and at the end of the plane ride he handed me an Ethiopian prayer charm that will never leave my bedside table." 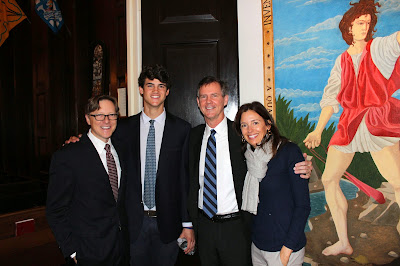 Both Colin and his dad stressed that there was more to be done to help provide education to the children of the Kalina community.

It was terrific to see Colin and Jim at school today; and their talk was a great inspiration to our current seventh and eighth graders who, along with all of our boys, continue their efforts in support of the Kalina community's education needs.