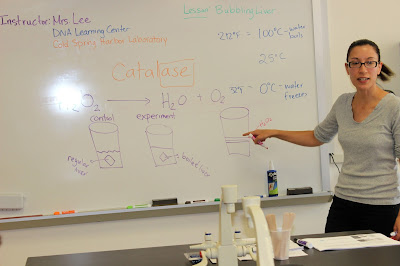 In their first session with an educator from the DNA Learning Center of Cold Spring Harbor, eighth graders participated in an observational lab about catalase, an enzyme found in many plants and animals that digests poisonous hydrogen peroxide into harmless water and oxygen molecules.

To test if the enzyme really does produce oxygen molecules, boys took a sample of calf's liver (which contains catalase) placed it into a cup of hydrogen peroxide, and observed the change in temperature and bubbling that occurred, noting that these indicated the possible release of oxygen. To further test, they took a small lit match and placed it in the bubbles, observing that the larger flames that resulted also indicated the presence of oxygen (see video clip). 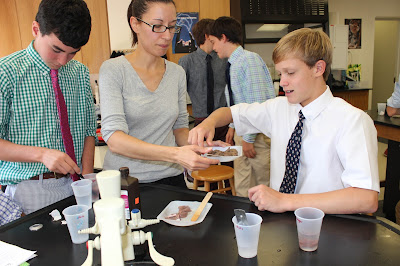 They then experimented and observed the deformation that occurred when the enzyme was heated or treated with acid (vinegar).

In this lesson the boys saw the importance of having a control in their experiment, of being precise, and thinking critically and deeply to hypothesize results. 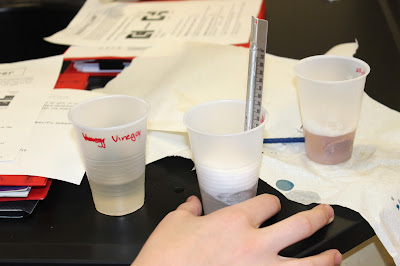 This was the first of several sessions that the DNALC will conduct in collaboration with Saint David's teachers as the boys conduct a yearlong microscopic and macroscopic exploration of the science of the human body, which will culminate this spring in an original DNA research project. Saint David's partnership with the scientists from the DNALC in Grade 8, now in its second year, affords our boys an exciting opportunity to engage in hands-on investigations with DNA scientists.