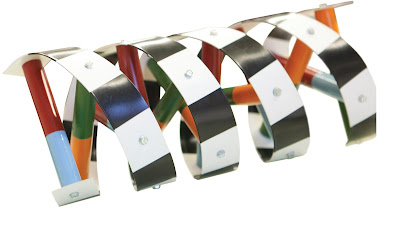 When I was a sophomore at Princeton, I took a course required for my major, the Molecular Biology Core Lab, an intense, semester-long lab course in which we learned all the major tools and tricks of Mol Bio, as we called it. We learned to isolate, sequence, and copy DNA, and to manipulate DNA in living bacteria. By the end of the course, we were all well prepared to join academic research labs to investigate and complete our senior theses.

This spring, we transformed Eighth Grade science class into a course remarkably similar to Core Lab. In February, we inaugurated the Eighth Grade partnership with the Cold Spring Harbor DNA Learning Center. Educators from the Learning Center led students through a series of ever-more complex labs, culminating in a multi-week DNA Barcoding research project, in which students chose topics of investigation, gathered samples outside of school, and isolated and processed DNA in order to determine the species that their sample belonged to. 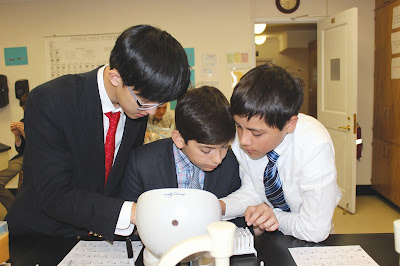 CSH faculty visited the Eighth Grade classes at Saint David’s numerous times throughout the spring; in addition, the boys traveled to the Learning Center’s teaching laboratory on Long Island for a day of labs and investigations. Early on, students studied the structure of DNA by building model molecules, matching complementary nucleotides, and adding bases to a sugar-phosphate backbone. They extracted DNA from bacteria and examined it with their naked eyes. Soon, students began manipulating DNA in living organisms by genetically modifying bacteria in order to make them glow green; when they visited the CSH lab, they learned about and tested ways that DNA evidence is used in forensics.

Throughout these increasingly complex labs, students honed their use of some key molecular biology tools and techniques — tools that I first encountered in college, and then used every day during my student internships in genetics labs.

First and foremost, students became comfortable using pipetters: highly precise tools used to measure and transfer tiny quantities of liquids during labs. Students used gel electrophoresis to separate DNA strands by size, and learned various applications for this powerful technique. During DNA extractions, we entrusted boys to load and run a small centrifuge, teaching them the importance of balancing the test tubes so that the rotor, spinning at 1340 rpm, doesn’t get thrown off-kilter; and they learned the theory behind Polymerase Chain Reaction, or PCR, a method of copying DNA segments that has utterly revolutionized the study of genetics. 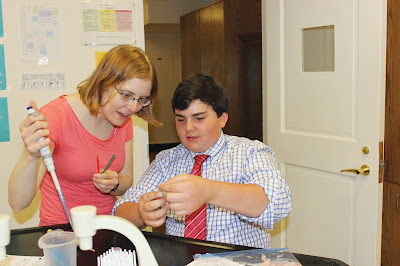 After practicing these techniques in a number of structured labs, we introduced students to the major project: groups would choose a research topic that could be answered through DNA barcoding, and plan and execute a test of their question. This project provided students a great deal of leeway to follow their own interests. Many groups chose to investigate food fraud: choosing a type of food (groups chose a wide variety of food products, including hotdogs, hamburgers, sushi, and teas); collecting samples of their food type from local stores, restaurants, or food trucks; and barcoding each sample to test whether the food contained the ingredients claimed.

Other groups chose biodiversity-related topics, sampling algaes, mosses, or even fish caught and released (with a permit) in Central Park. Two groups aimed for health-related issues: one group swabbed subway surfaces and phones to identify prevalent bacteria, and another ambitious group attempted to find parasites in fish from fish markets. 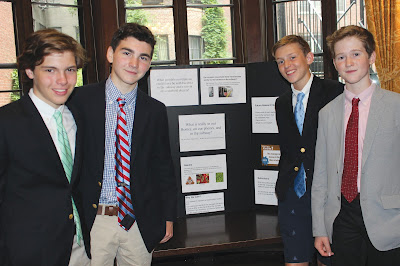 Groups chose their topics, formed plans to collect their samples, and acquired them outside of class, bringing them in to perform a complex DNA extraction on the appointed day. After PCR and gel electrophoresis, we sent the samples off to be sequenced, and finally, a week after the initial extraction, boys were able to see their results. They used a computer program to compare their sequences to a database of known genes, and used this database to determine the species of their samples.

Many groups found exciting results: enterobacter on subways, fish in what was labeled as turkey, and bacteria in store-bought fish. Other groups found expected, and often reassuring, results: all the beef hotdogs tested truly were beef, and local restaurants serve what they claim to. Groups troubleshot questionable results, hypothesizing factors that could have gone wrong in their experiments. 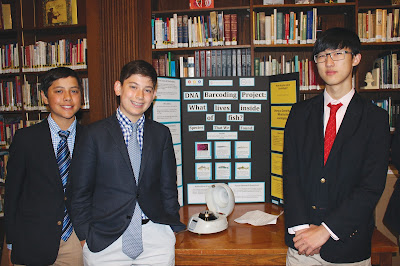 Finally, all groups created posters to present to faculty and to the seventh graders who will complete similar projects next year; these were displayed during a DNA Expo. Each team presented both the highlights of their research, and also a tool or technique they had learned during the spring term. Groups taught teachers and seventh graders how to complete Punnett Squares (using marshmallows!), load DNA into a gel for electrophoresis, use a pipetter, and even to extract and look at their own DNA! The Expo was a tremendous success, with eighth graders as proud teachers, and their teachers and schoolmates as fascinated learners.

When I think back to my Core Lab class, I remember what a struggle it was to absorb all the new information and techniques — and even to develop the dexterity required to transfer, say, 20 microliters of liquid into a tiny well in an agarose gel. I know some of these boys will go on to learn what I did, and more, and when they come to a class like Core Lab, they will know exactly what to do.