The day started with an early rise in Rome at 6 AM.  The boys boarded the bus and said arrivederci, Roma. 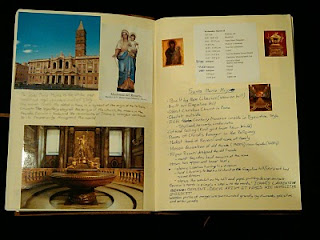 After being pelted with freezing rain and hail Thursday, Friday proved itself to be absolutely beautiful and sunny; almost, dare I say it, balmy.  The ride from Rome to Assisi took 2 1/2 hours.  Upon arrival, the boys visited the Upper Basilica where they presented their Via Assisiana Lectures.  They then made their way down to the Lower Basilica to view St. Francis’ tomb. Each of the boys lit a candle, said a prayer, and then put that candle in a basket to be used during the next mass.  After the Basilica tour it was back on the bus for the second 2 ½-3 hour leg to Florence.  Just outside Florence the bus made a special stop at Piazzale Michelangelo.  High up in the hills surrounding Florence the boys could view the entirety of the city below them—Brunelleschi’s Dome, Giotto’s bell tower, the Campanile, and the meandering Arno.  The bus pulled into the Hotel Kraft right on time.  When one 8th grader was asked what the highlight of the day was for him, he said: “The real highlight was seeing the tomb, giving the chapel;" while another reflected, “I will always remember the impression that Assisi left on me, to see the same view that my favorite saint saw hundreds of years ago really made me realize that some things never change.”
Journals are coming along.  The photo included is of a few pages from one boy’s journal.
It is easy to see why Francis is a special saint to Saint David’s.  All are healthy and happy.  Believe it or not, but we just did a bed check and all the boys were under the covers—they are either incredibly good actors or they are all dead tired.
Ciao