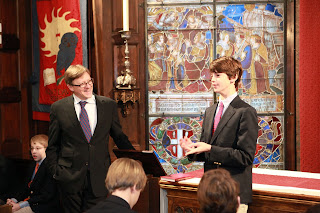 In addition to celebrating milestones and achievements, anniversaries are most importantly times to stop and reflect on one's purpose for being.  Given that this is Saint David's 60th year, the school has a unique opportunity to do just that.  In an effort to not only celebrate this milestone in the school's history, we have made it a priority to give back--to contribute to the greater good in a meaningful and substantial way.

Saint David's wanted its focus to be on "helping children" and "education."  What better way to celebrate the mission of our school than to reach out and help build another.  Sixty years ago this February, a small group of determined families and educators, against incredible odds, founded Saint David's School.  In this anniversary year, we have committed to do the same.

Under the direction of the Student Council, the Class of 2011 has chosen to lead this effort and build a school in Ethiopia.  This past Tuesday, January 25th, Student Council President, Colin J. and I presented this initiative to the boys in Chapel.  We spoke not only of the school's anniversary and its significance, but also of the school's mission, and of the boys' collective responsibility to contribute to the greater good.  We also spoke in chapel about the notion of delayed gratification and how in our "New York" lives we do not often want for much, or for long.  The 400 children who live in the Tigray area of Ethiopia, where Saint David's will work, is in desperate need of a school.  They have none.  And a well.  They do not have one of those either. Their needs are great.

Building a school in Mamet village, Ethiopia is not something that the boys will achieve in one year.  It may instead take several years.  Like the great cathedrals of Europe, what the class of 2011 begins today may not be completed for many years to come.  Today's 4th grade boys, or maybe today's 5th grade boys will be the ones who ultimately orchestrate its completion in 2014 or 2015.   The Class of 2011 is beginning something, a legacy, far greater than themselves.

After chapel, the boys went to Hume Library to meet Saint David's important partners in this endeavor: Mimi O'Hagan from Mimi's Building Blocks and Anne Marie Fox from Save the Children.  A slide show giving an overview of the program is embedded.