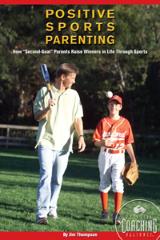 PCA argues that the second goal of sports parenting--the Second-Goal Parent--is to focus relentlessly on the "big picture." The first goal, striving to win, should be left to the coaches and the athletes.  The focus of the parents should be on the second goal--the big picture focus--building character so children develop into successful, contributing members of society.  By the way, this is also a goal of the school's program.  This big picture view can be conceived of in lots of ways including remaining physically active throughout life, learning to bounce back from difficulties with renewed determination, and discovering how to support others.  Active participation in sports, as we all know, does this--our challenge as schools and especially parents is to not to lose sight of this big picture focus.

Many parents get carried away in youth sports focusing more on preparing the path for their children instead of preparing their children for the path.  Parents need to focus more on endorsing and embracing the competitive process rather than the competitive product.  Comments from parents like, "You're working hard and it's paying off" are far more beneficial than, "How can we fix it?" comments/critiques, for example, in a post game conversation.  Parents and children talking about sports should be viewed as a conversation amongst equals.  Our job, Mr. Eisendrath, a Division One Hockey player for Brown, is to avoid sucking the fun out of it.  One startling statistic Eric reported was that 70% of children quit sports by the time they are 13. Coaches should be coaches, and parents, parents.

A parent's role is to BE THERE and BE HAPPY FOR THEM.

Post Script: For the past several years, as part of the school-wide Curriculum Initiative, Saint David's Athletic Department has been critically reviewing its curriculum.  The school invited the Positive Coaching Alliance to work extensively with its coaches, observing the program and critiquing our coaching methods and practices.  PCA and Saint David's have been working together for several years now in an effort to continually improve best practices.  We have always had a strong program; our work with PCA and our critical review is making us even stronger.

After observing all the coaches during each of our three athletic/sports seasons, the alliance designed specific, targeted professional development workshops for the coaching staff.  Usually occurring on Saturdays, the coaches would go back to school for the workshop.

Two recommended books that came out of the night: