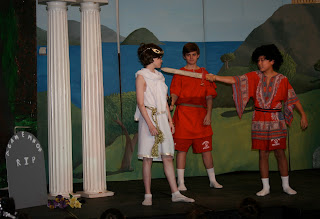 Today, before a packed house in Hyman Hall, 7 Pi performed the second of Aeschylus' three tragedies that capture the events succeeding Agamemnon's return from the Trojan wars.  The "Oresteia," the trilogy, is probably Aeschylus greatest work.  In essence, Libation Bearers tells the story of Orestes, played incredibly powerfully by Julian, conspiring with his twin sister Electra (played confidently by Khalid) to avenge his father's death and bring honor to the doomed house of Atreus.

Those familiar with the myth will remember that Clytemnestra murdered her husband, Agamemnon, in retribution for his sacrifice of their daughter Iphigenia so as to obtain favorable winds during the initial Greek voyage to Troy.  Clytemnestra plotted for ten years to avenge her daughter's sacrifice. Libation Bearers picks up the story seven years after the murder of Agamemnon, with the long awaited return of Orestes, his son, from slavery--slavery imposed upon him by his own mother.

You can tell acting is superb when all the audience turns to see what the actor is looking at in back of the theater when he speaks of seeing the "Furies" before him; but there is nothing there.  It was an exceptional performance by the cast.

In the scene above, Orestes confronts his mother, Clytemnestra, for the first time after escaping from slavery.

Underlying themes include justice and the evolution of trial by jury for the ancient Greeks.