The Girls from Spence 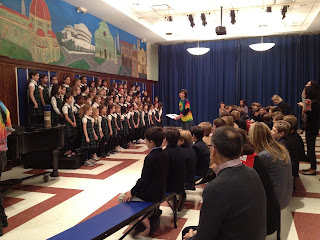 Saint David's 3rd Grade boys played host to 3rd Grade girls from Spence this morning in Hyman Hall.  After singing for each other and then with each other they enjoyed getting to know each other over cookies and juice.  The girls performed a very 60s inspired revival with some Peter, Paul and Mary, while the boys presented numbers that complemented their study of NYC Immigration--a little "New York, New York" by Leonard Bernstein, Irving Berlin's "Couple of Swells," originally sung by Judy Garland and Fred Astaire, some West Side Story, and of course The Beatles' "Let it Be" to close it out.

Together Spence and Saint David's then sang "Getting to Know You" from Rogers and Hammerstein's fifth musical "The King and I."  What fun!

Following is a small clip I filmed on location--it's the boys' final number.