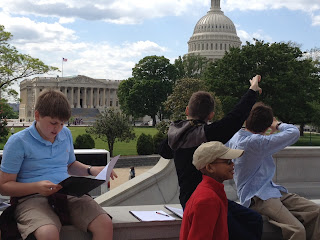 The Class of 2014 arrived safely by motor coach in DC this afternoon, on schedule, at around 1PM.  After depositing luggage at their hotel, they immediately headed off to visit the Library of Congress where they viewed specifically two bibles--the Gutenberg and the Mainz--both crafted in the same German town in the mid 1400s; examined early perspectives of the Americas through original maps of early explorers; carefully reviewed the nation's founding documents: The Declaration of Independence, The US Constitution, and The Bill of Rights, and then left for the Supreme Court and a special tour and lecture.

In a report from the field earlier this afternoon, the teachers noted that the boys were recognized for asking really thoughtful questions of the Supreme Court presenters.

Later this afternoon, the boys will check into their hotel, get their room assignments and then head out to sports on the Mall.  After enjoying dinner together, they will embark on a private trolley tour of the Monuments of Washington this evening.  The boys will be focusing on Lincoln, Washington, Jefferson and the new MLK monument to name a few.

The trip to Washington marks the culminating experience of a comprehensive study of the founding of the Republic, its system of government, and the desire of the school to have the boys experience first hand, after extensive study, "the world up close."