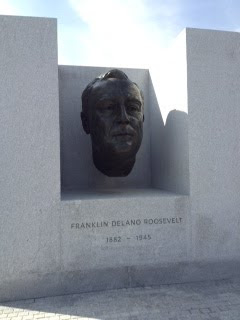 I had the great honor to be present at the dedication and official opening of Four Freedoms Park this past Wednesday, October 17, 2012.  It was a beautiful fall day.  Clear blue sky, calm. Roosevelt would have been proud.  Looking south from the tip of Roosevelt Island where the memorial is located, across the East River to the left one sees the United Nations, to the right the old Brooklyn Navy Yards.  Both these institutions were heavily influenced by the thoughts and actions of the 32nd President.  And directly south, as the mayor mentioned in his remarks, one sees Liberty and the sea.

Designed by Louis I. Kahn thirty-nine years ago, the simple, clean lines of the monument--its trees, steps, and massive granite blocks--the symmetry of the central lawn, his startling use of perspective, the bold bust of Roosevelt and the floating words of his Four Freedoms speech all combine to express a powerful and moving message. 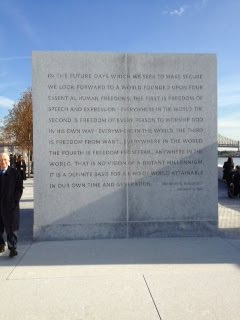 I was the fortunate guest of the family of Ambassador William J. vanden Heuvel who was the driving force behind the monument's completion.  I'd strongly recommend a visit.  It will prove a moving and memorable experience.