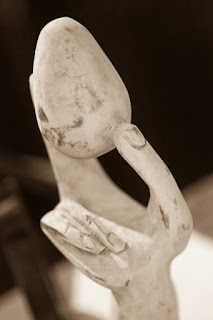 Tully McLoughlin '03 opened his Alumni Homecoming Chapel Talk for current 8th grade boys and all high school alums by stating how honored he was to be delivering a Chapel ... "Special to be here…These talks were some of the most important moments for me at Saint David's"

Tully observed that those gathered in Chapel were boys who would soon be departing (eighth graders) and those who are returning (boys in high school). He spoke of his chapel as being an attempt to capture the nexus of this leaving and returning.

Tully himself has recently returned from Ghana on a fellowship where for a year he taught radio journalism to students at a local radio station. He noted how much he had grown personally in the year he was so far from home. While in Ghana, he came to be familiar with an Adinkra (a visual symbol) created by the Akan people–the Sankofa, which became the focus of his talk.

Tully explained that the Sankofa is the symbol of a bird turning its neck to look back, often at an egg. The symbol's basic message: "It's never wrong to go back for what you've forgotten" suggests the important ways in which the past informs our futures. As Tully thought more about the symbol though, it took on a greater meaning for him. "I want to suggest to you all at the nexus of your leaving and returning to Saint David's, that you can always come back. But the egg you have on your back is not simply the things you leave behind, it is also the things that you take with you from Saint David's."

"From Saint David's I took passion, the desire to do public service, to give back to others, a level of confidence and knowledge of the world from my humanities class." The egg then is meant not only to remind us of the past, or reassure us that the past builds our futures, but, Tully suggested the "egg is meant to be given and shared, not just looked at." We are to give a part of ourselves and our experiences to do good. 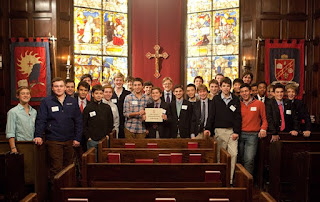 Tully connected his insight to the school's motto "That they be good men," something he considers "less as a state of being, and more as a process of becoming"-- one that lasts a lifetime. He closed his talk encouraging the more than one hundred alum boys present to "devote some part of your life to finding a way to give back to others." 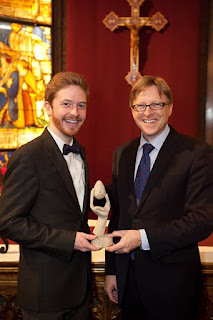 The boys' giving of themselves was celebrated later in the evening at the dinner, when Annemarie Fox from Save the Children, accepted a $57,000 check from this and last year's Saint David's Student Council Presidents for the ongoing Dollars for Ethiopia Scholars project to build a school in Ethiopia, which was begun during the school's 60thanniversary year. The effort has involved the boys in a series of fundraising activities, and is now entering its third year.  Ms. Fox noted she was "wowed" by Saint David's community's commitment to this project and success thus far, as it has raised  a total of $85,000 toward its $100,000 goal. "Think about the wonderful thing you are doing for kids you have never met across the world," she said. "Next year, at this time, I think they'll have a school."

Pictured in the center is the Class of 2012 being recognized in Chapel after Tully's talk for their Class Gift--a $100,000 gift--establishing The Class of 2012 Scholarship Fund in the school's endowment.

After graduating from Saint David's, Tully went on to graduate from Regis and Yale.


Saint David's is a true community--Tully, Scholarships, Save the Children, and 130 high school alums in Chapel and at table sharing a meal at Thanksgiving.