A City that Scrapes the Sky

May 16, 2013
In another example of a new field trip incorporated into our academic program to enrich learning, our second graders visited the Skyscraper Museum yesterday.

In class throughout the year, the boys have been studying New York City's history, from the early days of its Lenape tribe inhabitants up through the city's role during the American Revolution. Much of their study has been done in partnership with the New-York Historical Society. Curators and education specialists visit the boys at Saint David's, and the boys visit the NYHS several times over the course of the year.

The boys have looked at the ways in which the city and its inhabitants have evolved. Yesterday's visit to the Skyscraper Museum was a culminating experience that explored a unique city's ever-changing skyline.

Boys reflected on how different our city of tall buildings today is from the time of the Lenapes followed by the early European settlers. They have  been exploring the concept of New York as an urban community.

At the museum, the boys examined the unique characteristics of skyscrapers, such as the Woolworth Building and the new Freedom Tower. Each boy will end the year creating his own New York City skyscraper with his art teachers with a special eye to architecture. The boys will then join together and present the "community"  they've created.

This yearlong multidisciplined study of New York has been a prime example of the type of active learning that incorporates many hands-on and diverse activities --theory and practice--which increase understanding and spark creativity--a signature unit in the second grade. 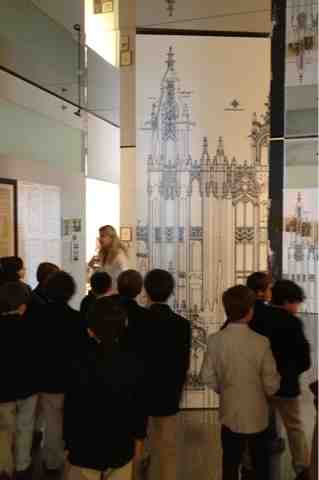