The school's strategic commitment to reaching out and contributing to the greater good took another huge step forward this summer with the second season of Horizons at Saint David's.  Directed by Julie Sykes and her team of exceptional teachers, Courtney Hopkins, Meghan Patterson, Melissa Ferrer, Lindsay Buhr, and Leah Kaplan, and accompanied by a host of volunteers, Horizons at Saint David's has delivered a program specifically aimed at preventing academic slide in children from low-income families.

This summer, a second cohort of seventeen boys from Harlem public schools were added to the first cohort of seventeen, making total enrollment 34.  Rising First and rising Second graders have been at Saint David's for the past 5 weeks participating in a full academic enrichment program.
In addition to its heavy emphasis on academic skill maintenance, the program has also provided daily sports and swimming instruction at Asphalt Green, art and music classes, and specialized field trips.

Yesterday, the boys were treated to a performance by Freaky Pets Live--a live show of fun, singing, dancing, juggling, hoola hooping, cycling, and a heart warming story about being separated from loved ones.  The boys just ate it up. Kevin Wulf, Charity Farrell, and Jennifer Machen were exceptional on the stage and the production crew could not have been more talented. 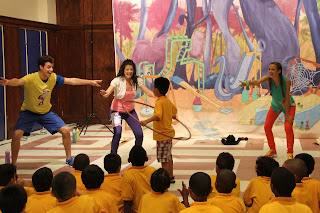