Third Graders Perform "Visit of the Three Kings" in Spanish 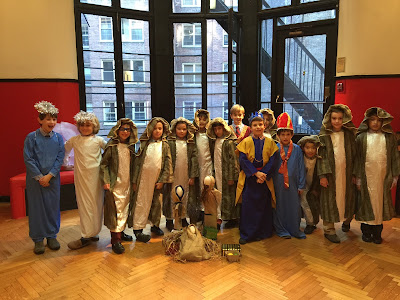 In the spirit of the season, each of our third grade Spanish classes presented the "Visit of the Three Kings" to second graders last week.

Written by their teachers, the performance featured dialogue in Spanish, and songs such as Los Ángeles del Cielo; Dum, Dum; and Noche de paz.

The boys, excited and confident before show-time, had been rehearsing since November. It was no small feat to master the all-Spanish dialogue, staging, and singing. They did a fantastic job in a performance that incorporated theater, religion, and music into their learning of the Spanish language, making teachers Cristina Cotumaccio, Maria Valdes, and Elizabeth Whitman proud.