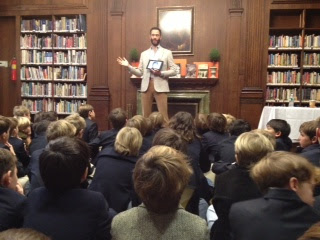 Sitting in Hume, the boys participated in a riveting conversation with Mr. Ward about Science Magazine's October issue on "The Brilliant Ten" which focused on ten young scientist under 40 whose innovations and research "will change the world."

The boys were particularly intrigued with the work of Andrea Thomaz out of Georgia Tech who is teaching robots to learn from humans.  Their questions of Ward when he spoke of Andrea's work took on an even higher creative tone and level of excitement.

Mr. Ward also shared with the boys his journey to becoming a writer/editor and his passion for science. He then walked the boys through Popular Science's process for selecting The Brilliant Ten--fascinating!

Science at Saint David's is a major curricular focus, and is becoming even more so with our growing emphasis on the boys engaging more tangibly with science, research, scientific institutions, and scientists.

Science is the world.

"I can see how it might be possible for a man to look down upon the earth and be an atheist," Lincoln once said, "but I cannot conceive how a man could look up into the heavens and say there is no God."