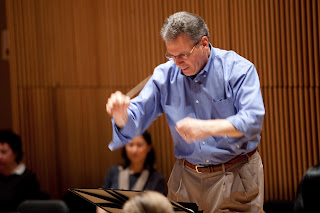 Yesterday morning, Sunday, April 14, a collection of boys and girls from the ensembles of Saint David's, Brearley, and Dalton came together at the DiMenna Center on Midtown's West Side for a Joint Rehearsal and Performance.

Beginning at around 9 a.m. the children gathered around breakfast to introduce themselves and to socialize, before beginning a joint rehearsal in the acoustically magnificent DiMenna Center, home to the Baryshnikov Arts Center, and the St. Luke's Chamber Ensemble. At 11:30 a.m.their parents and friends were invited to witness the product of their labors--and what a stunning product it was! 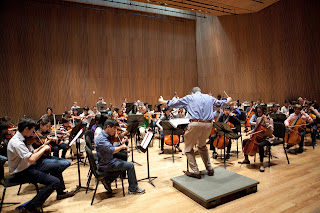 Playing before an excited and captivated audience, the Joint Orchestra played Moldau by Smetana first, followed by Tchaikovsky's Second Symphony, known as the "Little Russian."

It was quite incredible to hear their sound after only a few hours of rehearsal together--a classic New York moment if ever there was one--stunning space, beautiful, classical music, and children performing it together.

I caught a small snip-it with my camera.  Enjoy.

Above is our own maestro, Phil Hough, leading the joint ensemble in the second piece.  It is also the subject of the short recording below.