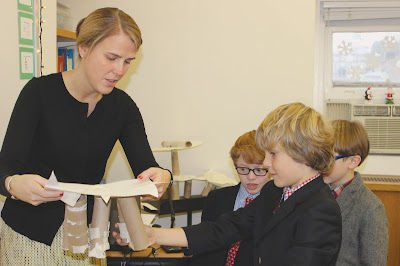 One of the most powerful approaches an educator can take is a form of trans-disciplinary learning that builds on students’ ideas and interests, called project-based learning (PBL). PBL is defined as having three components: 1. an essential question which establishes a real-world meaningful context and becomes the drive of student engagement; 2. standards-based STEAM (integrating Science, Technology, Engineering, Art and Mathematics) learning objectives, which provide the road map or direction; and 3. students’ previous experiences that act as the guideposts through the learning experience. Other common characteristics of project-based lessons are that they often take place over a longer period than most lessons, involve the creative solution to a problem, and usually result in a tangible product. (1)

This fall in math and science classes, second graders learned about the European Space Agency’s success with the Rosetta spacecraft and its 220-pound lander, Philae, which harpooned itself to the surface of a comet in November, allowing for the first extended close examination of a comet. Designed to operate through 2015, Rosetta and Philae will make observations as the comet makes its nearest approach to the sun six months from now, at 115 million miles, still outside of the orbit of Earth. 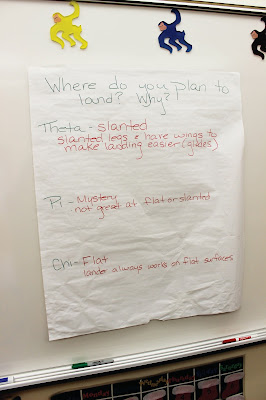 “Invited by NASA,” boys were assigned a mission: design a prototype lander which can successfully land on, and explore, a comet. Students were tasked with building a second generation lander, Philae II, which would explore a different undiscovered comet. Working together in teams, the boys had free rein to come up with ideas about how to build successful probes using the following items: paper towel rolls, masking tape, measuring tape, and card stock paper. There were several guidelines each team had to follow due to the terrain of the comet. In order to be successful, each lander needed to be no larger than a piece of paper, had to have at least three legs and be able to attach to, or stand on the comet.

The unit was launched with the essential question, “How can you build Philae II to successfully land on and explore a comet?” This large challenge was broken down into smaller, manageable tasks by presenting different tiers of questions. The smaller tasks were directly related to project goals and provided guidance to keep students on track. During the first phase of this challenge, each student engineer received measurements for their probe’s legs in inches that they had to convert into centimeters. Next, students used their metric measurement to match up with their engineering team.

Once teams were formed, students learned about the three regions of the comet. The first region was flat and wide. This was an easy spot to land, but was not very interesting geologically to scientists. In addition, this region was in proximity to a mountain range, which could inhibit the solar-powered sensors on the Philae II. The second region was extremely rocky and on an exaggerated slant. There were very unusual geological features in this region that NASA scientists were very interested in exploring. This region was in direct sunlight, which would allow the solar-powered sensors to work for an extended period of time. The third and final region was highly interesting to scientists, yet completely unknown (known as the mystery surface). The final step in phase one of the challenge was to decide which region of the comet Philae II would land on, explain why that was a region of interest, and create a design plan for the lander. “When we make thinking visible, we get not only a window into what students understand, but also how they are understanding it. Uncovering students’ thinking gives us evidence of students’ insights as well as their misconceptions.” (2) Asking students to make a plan and support their plan with evidence of why is a way to gain insight on student understanding.

The second phase of the project was the actual building and testing of the various landers. Each team had several opportunities to test their prototype on a practice comet, based on the three known regions. Continuing conversations in both science and math classes, students encountered the same concepts in multiple ways; thus helping them develop a depth of understanding and demonstrate true knowledge transfer. 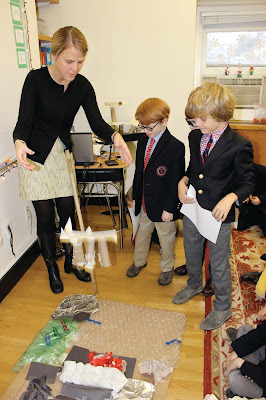 On the final “Test Day,” various models were dropped on the surface of a mock comet, which included such potential obstacles to landing as black holes, lava, and plateaus. Once all tests were completed, the boys discussed why certain designs made successful landings on the comet’s surface, while others did not. “Learning and a depth of understanding are enhanced when the concepts are applied in authentic contexts where the activity uses methods similar to those currently practiced in science and engineering. Students who build and use the skills and methods in which scientists engage will be developing hypotheses, using experimentation and observation to build evidence, participating in position-driven discussion, citing evidence in explanations and arguments, and using visual representations when explaining scientific findings and phenomena.” (3)

By inviting students on this mission, they became the center of the learning process. Students were empowered to make decisions and apply prior learning experiences to the culminating project, the Philae II. This mission was designed with important specific learning objectives in mind, while also accomplishing core learning objectives as well. In math class, students completed units on measurement, time, and graphing. This mission allowed boys to understand how all three topics can relate to real-world happenings. Boys needed to measure lengths, use appropriate tools strategically, classify events according to duration of time, and be precise when making calculations. They also focused on an engineering project: to build an actual comet probe and test their final project. 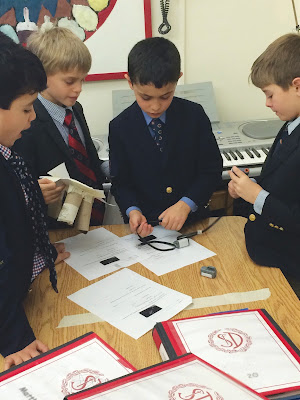 In science the boys first gained background knowledge of the Rosetta mission and the Philae lander. Students learned how scientists and engineers work together, how engineers work to solve problems, and what components help objects fly and land softly. They also came to realize that engineering design is an iterative process, involving repeated rounds of analysis and testing. Boys were then asked to reflect, through writing and/or drawing, on one of two response questions: What is something you still wonder about the Philae comet lander? What sensor would you attach to the Philae comet lander?

The class then focused on attaching sensors, using Lego kits to explore the relationships between Input – Processing – Output. They were then asked: How do sensors work? What can Philae’s sensors tell us about the comet? In art, students worked on building compositions using scale and overlapping of elements to show whether an object, or a person, is in the foreground, mid-ground or background. Boys communicated their learning and what they wondered about the Philea through these compositions. Their work was rich, detailed, and beautifully employed the concepts of scale and overlapping. Varying the contexts in which students encounter a given concept, and allowing opportunities for application and connections to other disciplines, help build and deepen student knowledge of scientific concepts. (4)