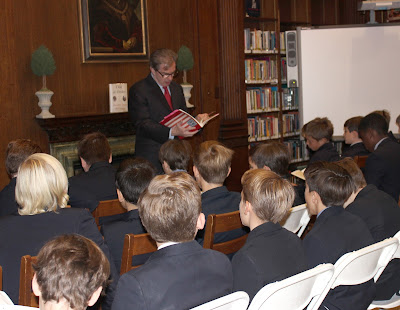 A first draft of the Constitution compared with the final...Frederick Douglass's letter to his former master...the Thirteenth Amendment abolishing slavery.

These were some of the documents that our sixth graders analyzed this morning as James Basker, President of the Gilder Lehrman Institute of American History, led a workshop for the boys and their parents in the Hume Library on "Why Documents Matter.'"

Today the boys got a taste of what they will experience when they and their teachers visit the actual GLI vault at the New-York Historical Society that houses the original documents. This is the third year of our school's partnership with this prestigious institution, which through the Gilder Lehrman Collection holds a vast archive of more than 60,000 primary source documents and artifacts.

In today's session boys learned that having access to original documents, complete with scratch-out edits, enables a researcher to look beyond the words to the strategy, thinking process and emotions of the writer. For example, when comparing a first draft of the Constitution with the final version, boys could see how the writers changed from identifying themselves as representatives of individual states to "We the People of the United States," marking, as Professor Basker noted, "a magic moment" in our nation's history.

When the boys saw that Frederick Douglass, in writing to his former master, declared, "I love you, but hate Slavery," they got a glimpse into the heart of this leading abolitionist.  And, they proposed that the 16th President signed the Thirteenth Amendment as "Abraham Lincoln" rather than with his customary "A. Lincoln," to underscore both the significance of the Amendment and his support of it. 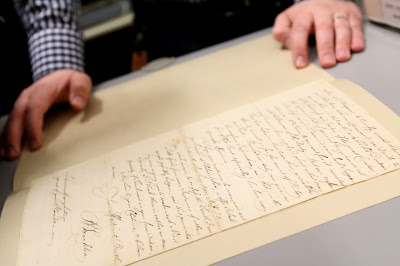 The boys will visit the GLI Collection as part of their study of American History, in a course that emphasizes the value of documentary evidence in its original context. There, they will learn via interaction, exploration, and engagement with the "real thing."

Deliberate moral introspection is our school's theme for this year and our collaboration with Gilder Lehrman provides our boys with the opportunity to deliberately analyze an original source document from multiple angles and perspectives, parsing it for the clues offered and the truths, often moral, it may point to.

Boys love to discover.  This is learning at its best.