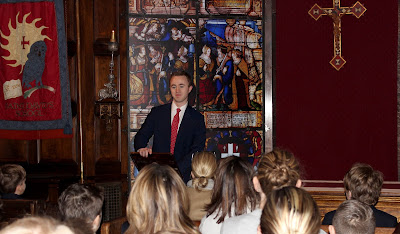 Bobby Hausen '07 gave a beautiful, special Mother - Son morning Chapel talk today for our fifth graders and their mothers, with his mom, Rosemary, also in attendance.

Bobby opened his talk by saying that the last time he was in the front of the Chapel was when he himself was a fifth grader, called upon to recite the following from Kipling's "If" :

If you can fill the unforgiving minute,
With sixty seconds' worth of distance, Run.
Yours is the Earth and everything that's in it,
And - which is more - you'll be a (Good) Man, my son!

He noted that while the poem contains words of advice from a father to a son, it had relevance for the morning's talk, which focused on the themes of limited time and a mother's boundless love. 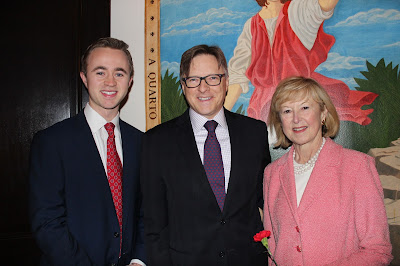 Encouraging the boys to appreciate the time they have with their moms now, Bobby noted that before long they will be in high school and college, then working, and won't be spending as much of their days with their mothers.
Acknowledging that it is normal for boys to strive for independence, as he did when their age, he expressed regret that "I didn't always appreciate the tireless sacrifices my Mom made. She was always there, through rough times, a shoulder to lean on." He shared the ways he tries to give back to his mom, and encouraged the boys present to do so, "through small acts, hugging her, showing interest in her life, writing a thoughtful card."

Bobby closed by relaying a more recent time when his mother was there for him during a hospital stay, and then later when he was there for her, and realized how important that kind of support is.
"I cherish moments with my mom," he said.

What a beautiful message and meaningful way to start the day!