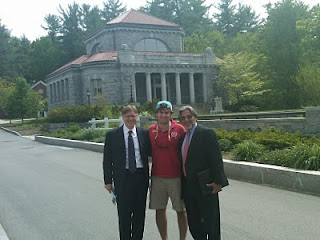 After Exeter, it was a quick drive north west to St. Paul's in Concord. After a visit to the head and admissions director, it was off to spend some time with Browning P., second year. A highly effective tour guide, Browning has developed a singular reputation for impressing parents, their sons and daughters, with his knowledge and love of all things related to St. Paul's. Browning was the consummate host, giving us a grand tour of St. Paul's campus and campus life.

In keeping with New Hampshire's state motto, I'm working my way through "How the Scots Invented the Modern World" by Herman--quite a thesis statement, but a nice companion for the flight up and back none-the-less.

Pictured are Browning with Mr. Imbelli and me in front of St. Paul's Library, by the beautiful pond.