The State of New York 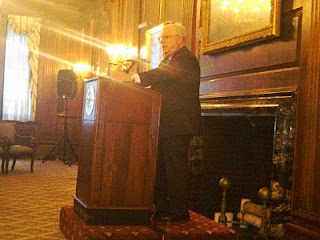 I had the great pleasure of welcoming Lieutenant Governor Richard Ravitch and alums and friends of Saint David's to a private club in midtown for our Alumni Council's 4th Annual Networking Event.  Loud applause filled the room when I informed the gathered alumni that I had just arrived from Randall's Island where Saint David's Red Baseball team managed to achieve a clear and convincing win against Allen-Stevenson, securing their claim to the league championship title.  To top it off, they did so with back-to-back undefeated seasons, making this the school's third title in as many years.  More applause followed.

This was a great place to start the evening because the remarks that followed told a very different story.  Lieutenant Governor Ravitch spoke directly to the failing economy of the state and the nation and the difficult nature of the road ahead. In sum, Mr. Ravitch expressed most concern about New York and other states' "disinvestment in higher education and state infrastructure," especially transportation, which he considers to be the very means for pulling ourselves out of the mess.  Many current practices and habits, he said, will have to change dramatically, and painfully, before we see things truly improve.  Even more concerning to the Lieutenant Governor is the country's negative and growing scorn of politics.  At the heart of democracy, he said, lies politics.  We can't have a democracy without it.  The rhetoric of our culture, he passionately expressed, will have to change for a much needed new generation of leaders to enter the political process.  Mr. Ravitch graciously took a series of thought provoking questions from the audience.

Under the leadership of David DeLuca '77, and with the support of Alumni Director John Dearie, the Alumni Council provided members of our extended community with a unique and intimate experience with one of our state's most important leaders.