Van Cortlandt and Verdi--Does it Get Any Better?

Saint David's Cross Country at Van Cortlandt Park is the photo at left.  A growing sport of interest amongst the Seventh and Eighth Grade boys, eleven are here seen beginning their cross country run at the Manhattan Middle School League Championship meet late yesterday.  After a grueling race, five Saint David's boys earned medals in this event: Blake K., Henry S., James W., Christopher W., and Henry T.  And then, early this morning, 7:45 AM, several of these same boys were playing Verdi's Nabucco on strings at the Ensemble's Morning Coffee Concert for parents and families.  Renaissance men in every sense, these young men managed to give virtuoso performances on and off the field.  Van Cortlandt and Verdi.  Does it get any better than that? 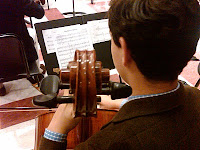 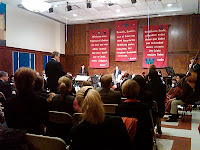