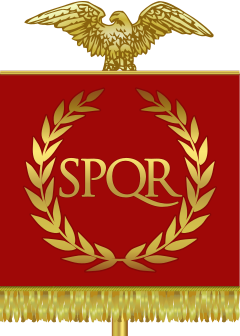 SPQR, The Senate and People of Rome, referred originally to the government of the ancient Roman Republic. It appeared on coins, at the end of official public documents, in dedications of monuments and public works, and it was emblazoned on the standards of the Roman legions.  In a letter I received this week from Mary Washington University in Virginia, this ancient initial appeared blazoned across the letterhead surrounded by laurel.  My interest, obviously, was piqued.

Each year, for the past several, Saint David's boys have participated in what's know as the National Latin Exam. They have always tended to do very well.  This year, however, was a little different.  Of the 18,100 students from across the world--the United States, Australia, Canada, England, New Zealand, Italy, Poland, Bulgaria, China, Guam, Japan, Malaysia, Virgin Islands, Iran, and Zimbabwe--who sat for this exam, only 328 students scored a perfect paper.  In and of itself this is quite remarkable.  What is even more remarkable though, is that of this 328, three were from Saint David's School:  Aidan Sheinberg '12, Felix Schliemann '12, and Alexander Hutchinson '12.

Congratulations boys, on a remarkable accomplishment, and kudos to their teachers, Dr. King and Mr. Romanosky!