The sweet smells of spring filled the Connecticut air Tuesday, May 3 as I drove north to visit alums at three New England boarding schools.  An early arrival at Watertown found me quickly catching up with Willy McMullin, Headmaster, on Saint David's boys at Taft.  In all, there are 11 boys currently attending Taft represented at all four grade levels.  It's a much bigger school than Saint David's with more than 460 boarders and some 150 day students.  Taft boasts a beautiful campus that is now enjoying the fruits of significant plant upgrades.  The distinguishing characteristic, in addition to the architecture of place, is the central hall--main street--theme of the school.  Taft prides itself on this focus on centrality, giving this "big school" in the words of the head, "a small feel." Pictured is the entrance to Taft and the new dining hall; the boys sitting with me in the Faculty Room discussing their respective transitions to high school, their suggestions for ways to further strengthen Saint David's, achievements, advice and a little spirited banter.  The final shot is of the boys in Lincoln Hall (named after another important president to Taft).

After leaving the boys at Taft it was a short drive to Choate in Wallingford for lunch with Andres and Harry, a junior and senior respectively for a conversation much like the one described above.  Later Kristoffer, a junior too, was able to catch up for a few minutes during math class.  Henry and Michael are also at Choate, but our schedules prevented us from catching up this visit.  During my stay, India, Hunter, '09 Briggs,'11 and Gardner's '16, sister happened to walk by our meeting room and noticed a familiar face and dropped in to say hello.  It is a small world.

The boys at Choate, and India, all appeared to be happy and healthy.  They expressed their love for Saint David's and for their teachers and classmates.  Some humorous stories were shared, and then it was time to move on to my last stop on this tour.  Harry is off to Sewanee, Tennessee for college.

My afternoon was spent at Pomfret in Pomfret with Christian, a sophomore, and William a senior.  Pictured are a few shots of the chapel and the dormitories of the main quad that look out over the new athletic fields and a beautiful vista beyond.  After meeting with Headmaster Brad Hastings it was on to meet with the boys in the Headmaster's Study where I learned that William is off to George Washington University next year.  Both boys were happy and very much at home.

Saint David's, I concluded after my 13 hour stomp, is exceptionally well-represented in the great state of Connecticut.  My thanks to all! 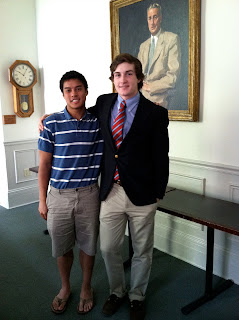