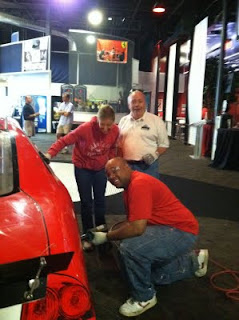 On a racetrack in the mountains of northern Westchester on Thursday, September 1st, 2011, the senior administrative team of Saint David's School, pursued a common goal.  Working in teams of three, they learned the challenges of a NASCAR pit crew and the skill and endurance required of a race car driver.  To successfully achieve the goals they established required, in addition to deliberate planning and flawless execution, a focused desire to overcome the many obstacles before them.  At left, Business Administrator Jack Sproule with Dean of Studies Ali Aoyama, and Director of After School Shadeed Elliot compete in the Pit Stop Challenge.

The exercise, the leadership group's opening meeting of the school year, allowed the team to explore this year's school-wide theme of "rigorous pursuit." Like Dale Earnhardt, Jr., or the famous Australian race car driver Peter Brock, the administrators realized that to succeed they needed the combined talents of each of their team-mates in addition to a healthy dose of determination and strategy. 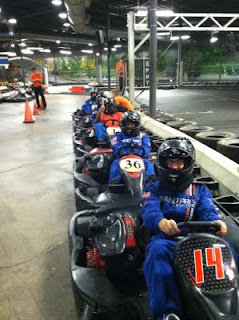 At right, starting drivers from each team take their positions for the much anticipated start of the endurance race.  Pictured with engines revving at a high squeal, poised to release their brakes and thunder down the straightaway are Dean of Faculty Shane Kinsella, in front, Registrar Sylvia Hopkins, Head of Lower School Kim Davidson, Plant Manager Mark Poelle, and Director of Athletics Pedro Morales.

Pictured below is the administrative team at the race conclusion.  Seated in the winning car representing the winning team is Director of Technology Nora Sundar.

I you have a minute ask an administrator, Who became known as "Red Flag?" Who was fastest on the track? and, Who earned the nickname "Quick Draw" because of their incredible facility with the air gun? 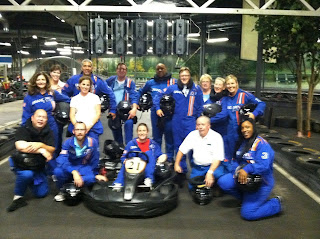