Following is my opening Chapel Talk.  The talk, or some variation of it, was given to the boys in grades 3 through 8 during their regularly scheduled Chapel time today.

Good morning, boys.  Welcome back.
It’s a new year.
Work smart. Work on.
Today, you are surrounded by newness.  It is a new school year.  You are in a new grade.  You have new teachers, new homerooms, new sports teams, new pens, pencils, books and even, maybe new shoes. You may feel a little nervous, maybe a little excited.  Maybe you feel anxious, even a little “unsure” because of all this newness.  You know too, that more will be expected of you this year—by your teachers, your parents, and even by you yourself.  There is much that may seem different, fresh, novel--new; but some things, if you look closely, haven’t changed.  In fact, we can all take great comfort in the fact that some of the most important things haven’t changed at all.

The mission of Saint David’s School can be found on the walls of our classrooms, in each and every publication of the school, and it hangs most prominently, in illuminated manuscript, in the school’s lobby.  Surrounded by all this newness, the school’s mission is steadfast, consistent, reassuring and guiding. 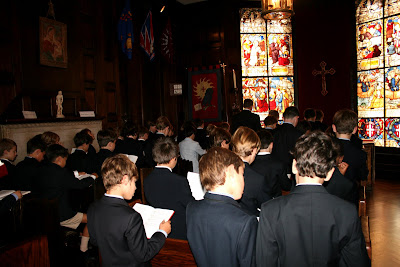 Our school-wide theme this year comes from the first line of our mission--rigorous pursuit.  Rigorous doesn’t mean more or harder, rigid or stiff.  Rigorous means working smarter--organized, thoughtful, deliberate and meaningful work.  It means developing a plan, executing that plan and successfully accomplishing your goal.  Accomplishing the goal, however will not always be easy.  It may not happen on the first, second or even third attempt.  It may take many attempts.  It took Thomas Edison 2000 attempts to build the light bulb before he got it to work.
And Pursuit means a continuing commitment to never giving up no matter how hard or how many times you fall down—you must push forward, fight on, and persevere.  Whether on the sports field, in art class, orchestra, or math class, we want you to:
Work smart. Work on.
And in chapel too.  Well, not exactly in chapel, but in your moral and ethical conduct.  Pursue this rigorously too.  For us at Saint David’s the easiest way to think about the rigorous pursuit of the spiritual is to apply it to the Golden Rule—treat others as you would want to be treated.  This is easy, right?  Who doesn’t want to treated like “we” want to be treated?
Well, not so fast.  You are older this year than you were last year, and our theme, remember, is rigorous pursuit.  We expect a little more of you this year.  We want you to think more deeply about the Golden Rule.  It is not a rule of enlightened self-interest. It is true, people are more likely to be nice to you if you’re nice to them, but the moral center of the Golden Rule is lost if you simply view it as a rule of exchange:
If I'm nice to him, he'll be nice to me.
I will do to him, what he did to me.
I will get him, before he gets me.
If you only look at it from this "exchange" perspective, it can quite quickly go astray.  The core of the Golden Rule is a moral obligation to treat others ethically for their sake, not our sake, even if our treatment of others is better than their treatment of us.*
We have a moral obligation to resist violence, remove barriers and resolve conflict.
We have a moral mandate to seek and to seize each and every opportunity for peace and goodwill.
If we rigorously pursue the Golden Rule, it really means that we will be honest to liars, fair to the unjust, and kind to callous people.  We will be generous to the greedy, humble to the prideful, and forgiving of the wrong doer.  Not because it’s to our advantage, which it may or may not be, but because it’s right. And because the way we treat others is more about who we are, not who they are.  We cannot control the actions of others.  We can only control the actions of ourselves.
"It’s like the man who broke off an argument that had descended into name-calling by saying, “Sir, I will treat you as a gentleman—not because you are one, but because I am one.”*
These are the virtues, respect and reverence, even in the face of hardship, that we want you to pursue rigorously this year—with your teachers, your parents, with strangers and most importantly with each other.
Work smart.  Work on ...
... in the arts, in academics, on the sports field, and most importantly, in all things moral and ethical–-your actions and your behavior ...
... Work smart.  Work on.
And how are you going to do this?   Well, that’s not for me to say.  It’s for each of you to decide.
I wish you a successful and fulfilling year.
*This vignette and the "higher" interpretation of the Golden Rule was adapted from Michael Josephson's Radio Talk # 730.5, Josephson Institute, July 7, 2011.