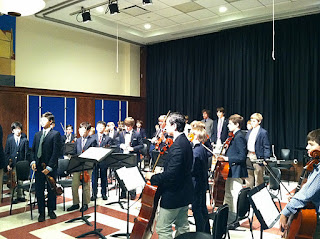 Our morning began today with a Saint David's Ensemble open rehearsal in Hyman Hall at 7:45 AM.  Many weary eyed parents filled the hall and enjoyed the boys playing Reinhold Glière's The Russian Sailors' Dance from his 1927 The Red Poppy ballet.

The dance was followed by a little Mozart and finally Henry Mancini's Pink Panther.  The boys were impressive given the fact that the seasoned core of the orchestra graduated last year.  This ensemble has been working together for just a few months.

Below is a little slice of Mancini from the boys rehearsal today.