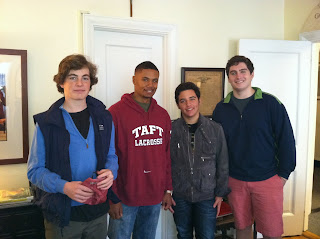 Taft, Hotchkiss, and Andover were all well represented yesterday at Saint David's.  Brophy, '10 from Hotchkiss, Mark, '08, Danillo, '10, and Hugh, '08 all from Taft and Chris, '11, from Andover (second photo) all stopped by to catch up.  Attending boarding school comes with some advantages, one of which is often longer holidays at times like this.  The boys' schools are closed for Thanksgiving.

Young Alumni Chapel and Dinner is tonight--a homecoming where high school aged alums attend Chapel and break bread with our 8th graders.  Over dinner, they will discuss the schools they are attending and share tips and pointers with the 8th grade boys who are right now going through the application and interview process.  Tomorrow is one of our school's longest standing traditions--The Odds and Evens Soccer Game.  Alums from the even years play the alums from odd years in a spirited game.  Typically, alums as far back as the early 70s and as recently as last year play.  Many older alums also come to watch, feeling more confident enjoying the game from the sideline, rather than playing it.