An Unexpected Drop By 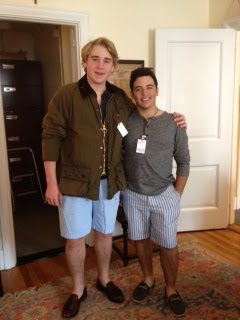 Tommy '10 and Danilo '10 dropped by Saint David's to say hello to teachers and friends.  Here they are at left in my office posing for a quick picture.

Both boys are finishing up their sophomore year at Taft and had a long weekend at home this weekend. Danillo is enjoying golf, playing in several tournaments with some success all over the east coast.  He just returned from one in Rhode Island. Tommy is busy with stage and choral performances, having just completed acting in an original dramatic production of the play "Roomies: One Year at a Time" and choral performances at St. John the Divine.  Tommy was also a member of the cast that took Rooomies on the road to England and Wales.

It was great to see them both home and filled with exciting tales to tell.