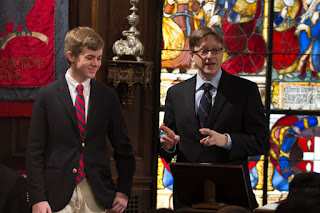 At Chapel Friday, Student Council President, Skakel M. and I, kicked off year three of Saint David’s School Ethiopia project. Launched in celebration of the School’s Sixtieth Anniversary in 2010, our aim was to raise the $100,000 necessary to build a school for a small village in Tigray, in the northern region of Ethiopia.

This will be the third successive graduating class that has assumed the leadership responsibility for Ethiopia.