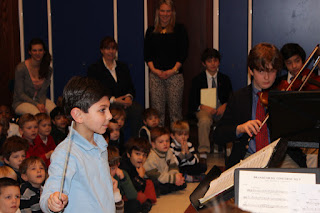 This morning, Saint David's Philharmonic Ensemble performed a special morning concert for all the Lower School boys from Pre-K through Grade Three. Coming on the heels of yesterday's first rehearsal of The First Orchestra (our new orchestra for boys in Grades One through Three), the younger boys gathered in Hyman Hall and watched, rapt, as Ensemble Director Phil Hough took them through the Ensemble's rehearsal process, from warm-up to an introduction to some of the orchestra's sections and instruments with which they might not be familiar.

One of the younger boys was invited to take the conductor's baton at one point and conducted the ensemble for a few measures of music.  The boys then enjoyed the Ensemble's performance of the Masterpiece Theater theme, Bach's Brandenburg Concerto No. 5, and a selection, the prayer in the woods, from the Engelbert Humperdinck opera Hansel and Gretel.