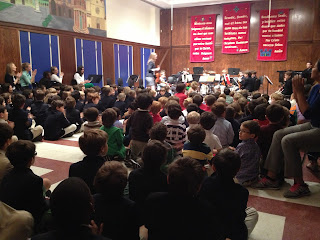 The First Orchestra held their debut concert his morning in a joint performance with the Philharmonic Ensemble for the Lower School in Hyman Hall. The First Orchestra, a string orchestra of our youngest musicians, consists of first through third grade boys who practice every Monday morning before school with Ms. Anderson. Assembled to hear them this morning was a collection of two hundred or so.

I visited earlier in the year when this inaugural group was just coming together, and it was a joy to see and hear them today, playing with the confidence that comes with diligence, hard work, and commitment over time.  There is something unique and special about a boy and his instrument.

The group demonstrated their prowess with scales and shared an exercise in which they listen to each other to successively play the same sequence of notes. They concluded with a performance of Twinkle Twinkle Little Star, a piece that incorporates harmony.

Next to perform was the seasoned Philharmonic Ensemble, under the direction of Philip Hough.  The Ensemble provided outstanding renditions of Vivaldi's Concerto for Four Violins, and Wagner's March of the Meistersingers.

The playing of classical music and the enhanced community it engenders thrives at Saint David's. It's so much fun.