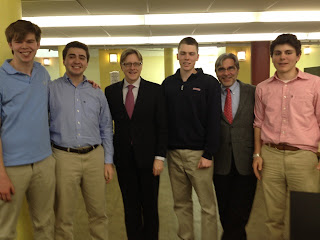 Late morning I high tailed it down to Regis for lunch with Saint David's alums.

Saint David's has ten alums currently attending Regis. Two will graduate this year as seniors and we have boys in every grade, with four more Saint David's boys joining Regis next year as incoming freshmen.

Accompanied by Mr. Imbelli, we enjoyed two lunch sittings with the boys to discuss their transitions to high school and to reflect on their time at Saint David's.

We had an enlightening and productive time sharing in the boys experiences at Saint David's and Regis, and the boys were quite candid in their advice and suggestions for further advancing Saint David's. 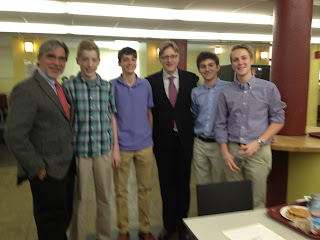 In the top photo you see the older boys with whom we ate second. The bottom photo shows the younger boys, whom we met first. They were all in great spirits!