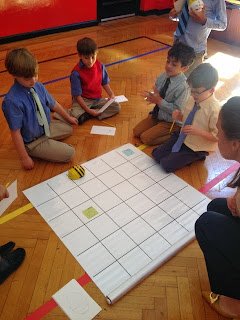 Today was their first session.  These "bees on wheels," much like a tank, can move forward or backward and they can pivot left and right. There are buttons on their backs that are associated with these movements. There is also a Go button in the middle, and stop and pause buttons.

On this day, to introduce the Bee Bots and how they work to the first graders, the teacher first played Simon Says.  It was an engaging and dynamic way to get the boys up and moving and to familiarize them with the commands they would soon be using to program their Bee Bots.

The boys learned quickly that the Bee Bot "remembers" a series of commands in sequence up until they press the GO button and then moves according to those commands.

Next, the boys were shown a map that featured HOME and their destination (in this case the PARK). After being given instructions to devise a route to get from HOME to the PARK, using the movement patterns that the Bee Bot can make, the boys worked in small groups, first developing their 'routes' away from the map so they could think about programming globally, discuss different options, and come to an agreed upon route.  The boys realized before long that there are several ways to solve a problem. 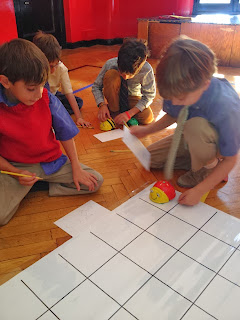 After much discussion, debate and processing, the boys wrote down or drew their agreed upon programming code (some boys used arrows to indicate the directions, while some groups used letters) and then tested it on the map.  The excitement in the small gym was palpable.

In later sessions, the teacher will add "Stop Signs" and new destinations that the boys can opt to program their Bee Bot to visit along the way, making this an open ended project that allows for differentiated learning and creative thinking.

Often the teacher will end the session by having the boys move like Bee Bots according to directions posted to the wall. In doing this, the class begins and ends with a kinesthetic component, important to boys' learning.

Overall, the main goal is to have the boys engage in problem solving and critical thinking exercises by discussing and testing a variety of options in solving a particular problem.