September 07, 2013
Late in the summer, former Student Council President, Colin J., '11, of his own volition, reached out to some of his nearby Saint David's friends in the Hamptons and organized a special fundraiser for the school's efforts in Ethiopia--efforts he himself had helped initiate more than three years ago.

The event took place Thursday evening, August 22nd at C-Wonder. 75-85 people attended the event where each family enjoyed 10% off their purchases. In addition, Colin had negotiated with C-Wonder that an additional 15% of the entire night's sales would be donated to the Saint David's Dollars for Ethiopia Scholars initiative.

Festive refreshments in the store included "hint" water and cupcakes with sprinkles donated with the Saint David's logo on them.

On the night, the store sold over $7,000 worth of goods, and two generous families decided to match the amount raised for the initiative, bringing the total raised by the boys that night to more than $4,000. 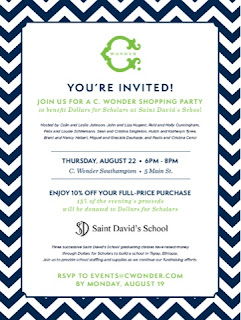 "Equally as important as the money," Colin suggested, "was that the event raised awareness about a project Saint David's has been working on for the past four years."

The best part of the evening, Colin told me, "... was having the opportunity to catch up with Saint David's boys from all ages.  Our love and spirit for the school has clearly not diminished!"

We couldn't agree more, Colin, or be more proud of you, your friends and your collective efforts--Saint David's boys contributing to the greater good, on their own!  Does it get any better than this?

The total raised by Saint David's boys over the last four years now amounts to more than $127,000; construction continues apace in Ethiopia.