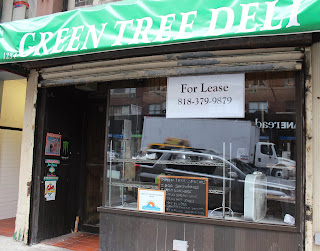 In the last week of October, 2013, an established fixture in the psyche of all Saint David's boys past and present, closed its doors.  The deli on the corner of 89th and Madison, not necessarily known for its Madison Avenue chic, but none-the-less a staple supplier of hearty food and other less healthy condiments, has become embedded over the decades, in the lore of the School.

As with any loss there is an intangible sense of sadness around its closure, and yet, it's no surprise that it has come to this.

In an effort to capture, reflect, celebrate, honor and maybe in a strange way glorify this fixture in the life of Saint David's boys, I penned a little ode in the style of the ancient poet Pindar.  He would often in his poems write of and honor youth and the things they valued.  I thought it fitting today to present this ode as my chapel talk for All-Saint's and Halloween.

An Ode to Our GTD

If ever a boy hungered or thirst
With all his wits aside, sparing himself
Neither expense nor culinary delight, to attain
A calming of his growling stomach
A quenching of his parched mouth
A sating of these essential desires
He would cross, the threshold of modern time
The great divide between now and then, and enter
Abandoning all hope, The Green Tree Deli.

Nothing wasted on the walls, nor even placed upon the shelves
Empty cigarette dispenser, crooked floor, cracked linoleum
Half-filled coolers, expired health certificate, affixed
With spit to the glass,
And grease laden, dust covered, fly infested ceiling
But ah, the food
The greasy, hot, no frills food.

Then must we give, to those
Who have satisfied these senses
For all these years, a proud tribute
Of lofty praise, and shun
All our feelings of profound melancholy, gone now
The four-ten rush, cheap soda, illegal candy, unhealthy chips
Gone, the curt, no-smile, New York mornings
Gone now ‘A TBB,’ gone
‘TBB … Bacon’

To a boy's mind the gift is slight, to speak
A kind word for unnumbered toils, and build
For all to share, a monument of glory
Our GTD
Our questionably clean, now abandoned, but immortal and glorious
Green Tree Deli, this ode’s
For thee