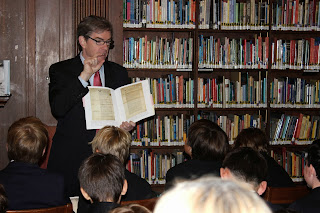 Yesterday, James G. Basker, President of the Gilder Lehrman Institute of American History, visited Saint David's to meet with our sixth graders and their parents to discuss the value of primary source documents.  Professor Basker explained that when people closely examine original documents, they become historians themselves rather than merely passive recipients of information. During the session the professor elicited observations and inferences from the boys as they closely studied reproductions of several documents in the Gilder Lehrman Collection including, a Boston Massacre print by Paul Revere, a version of the Declaration of Independence believed to be the sole survivor of a Charleston, South Carolina printing, a letter from George Washington in which he expresses his misgivings about slavery, and a letter by abolitionist Frederick Douglass to his former owners in which he forgivingly declares, "I love you but hate slavery."

In one activity, boys compared the Preamble in an early (confidential) draft of the U.S. Constitution with that of the final version, in which "We the People of the States of New Hampshire …" became "We the People of the United States …" Prof. Basker noted how that difference indicates the powerful change in thinking among our founding fathers in the few short weeks of the convention in the summer of 1776 : "They stopped thinking of themselves as separate, but instead as members of one country." Only close scrutiny of original source documents can teach you this.

Basker also touched on the value of preserving the personal documents of ordinary people, such as letters from soldiers during the Civil War, for the insights they offer into peoples' thoughts and emotional states at a particular time.  The boys examined several examples with the professor.

This year our sixth graders are studying American history in a course that underscores the value of documentary evidence in its original context. Through our new partnership with the Gilder Lehrman Institute, the boys will have access to their unique archive of primary source documents—more than 60,000 now housed at the New-York Historical Society—and they will critically analyze and interpret them to explore what it means to live in a democracy. In an era of digital communications, in which insights into the process of thinking can be difficult to discern, access to this extensive collection will reveal the important information that can be gleaned only from examining documents in their original forms.

The Gilder Lehrman Institute of American History was founded in 1994 by Richard Gilder and Lewis Lehrman, businessmen and philanthropists, whose love of history led them to compile the largest private collection of historical manuscripts. The purpose of the Institute is educational: "to promote the study and love of American history" by making their rare collection available to educators and students through various media.