An Expo of Cultures 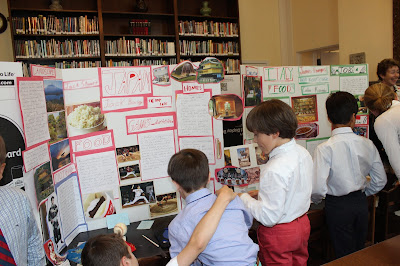 The vivacious energy in the Hume Library last week might be expected more at a pep rally than at a research exhibition.

But research expo it was, and it was a fantastic display of the third graders' culminating project on their study of culture.

Working in teams, the boys selected a culture they wanted to research, with each boy responsible for two aspects (for example, food and education). Assisted by our school librarians Gwen Kaplan and Gretchen King, the boys learned the process of conducting research on their topics. They worked on their projects, which also involved expository writing, creative crafts, poster design, and public speaking, under the guidance of teachers Claire Lescop, Jennifer Kim, Liza Helwig, and Amanda Rathbun. 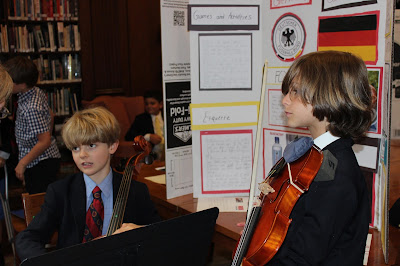 Boys were given significant freedom in how they would finally present their project, and they had to include a creative component brought from home. These delighted visitors, and ranged from boys playing a Bach minuet on the cello and violin (Germany), the distribution of vanilla and chocolate gelato (Italy), a Japanese pop song video displayed on an iPad, and a diorama reflecting the dry landscape of South Africa.

Beyond the obvious efforts the boys had made to make their presentations stand out, what struck me most was their level of engagement. When asked a question about why they selected a particular topic or what surprised them about their selected culture, or what was most challenging about the project, the boys' eyes would light up and they were eager to share their learning and their thoughts.  Their classmates were equally excited to share with each other.

This is the type of active, creative, project-based learning that we incorporate throughout the school program at Saint David's.