A Visit from Kent and a Fun Walk Home 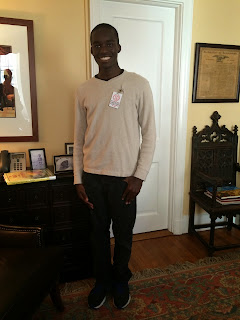 Tyler '14 dropped by the office to say hello Monday.  Apparently, he was celebrating a Headmaster's Holiday at Kent or some strange thing.  We don't have them here at Saint David's, although the idea is intriguing. Tyler's taking Honors Bio and Honors Geometry, is reading the Odyssey in English (feels well prepared for this one because his old headmaster, yours truly, read him the stories in 3rd grade), and is playing on JV Soccer.  Tyler is especially excited about trying out for crew in the spring.

At the big game yesterday against rivals St. B's, I had the great fortune to walk home with William '14 and Michael '14 both at Loyola.  I snapped a shot on the walk.  Having them both slow down long enough to catch this shot was my biggest challenge.  Talking about high school and catching up with all that's happened since graduation was the easy part.  They are both enjoying high school and feel well prepared.

Both Saint David's teams played hard against St. B's in the biggest game of the season.  The Osgood Cup, unfortunately, will be placed upside down until this time next year.  It's been up for the past three.  I suppose a rest was warranted.  The boys played hard.  It was a shot on goal in the last 50 seconds that clinched the game for St. B's. 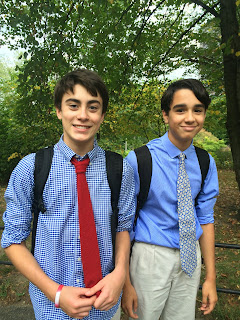