The Cup is Down 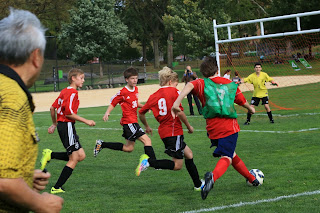 Both Saint David's teams played hard against St. B's in their biggest game of the season in Central Park yesterday.  The Osgood Cup, unfortunately, will be placed upside down until this time next year.  It's been up for the past three.  I suppose a rest was warranted.  The boys played hard.  It was a shot on goal in the last 50 seconds that clinched the game for St. B's resulting in a 3-2 loss for Saint David's Red.

Saint David's White, shown left, however was a different story, defeating St. Bernard's in a strong 2-1 battle to the finish.

Mr. Charles Osgood had communicated with members of the faculty earlier in the day regarding the anticipated arrival of his flight from Washington.  He'd also penned a letter to be shared with the boys expressing his excitement about the afternoon's game.  Charles has been an ardent supporter of the school and the boys for decades.  Some here believe his association has existed since the very earliest days of the school founding.  A man of some mystery, we aren't completely sure if he actually made it to the game, although one of the boys commented on seeing someone "observing enthusiastically from some distance." 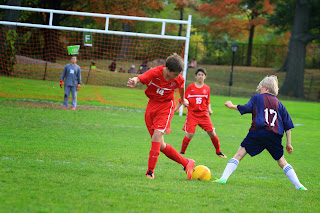 Next year, Mr. Osgood, next year.