April 28, 2010
The habit most associated with charity as a virtue—generosity—is the giving freely of time, talent, skill, or resources without the expectation of something in return.  It’s a noble notion, literally.  The etymology of the word, from the Latin root, literally means “kin” or “clan.”  The earliest usage of the word reflected an aristocratic sense of being of noble lineage or “high birth.”  Over time the meaning changed.  Generosity began to identify a nobility of spirit, rather than family heritage; to signify character traits and actions associated with the ideals of actual nobility such as gallantry, courage, strength, gentleness, and fairness.  Today, the meaning of “generous” has changed further to mean munificence, open-handedness, and the liberal giving of money and possessions. Over the course of centuries, the meaning of generous has shifted from an ascribed status restricted purely to the “nobility,” that was either truly earned or not, to be an achieved status of admirable personal quality and action, that is achievable, although not easily, by anyone*. 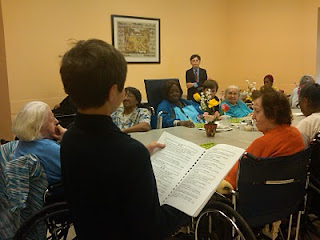 As I continue to reflect on our school’s theme for the year this word generous surfaces often.  I like the democratization of the word’s meaning over time.  It is no longer given by right; but truly earned by actions and behavior, by habit.  But it has to be achieved.  To achieve, to earn something takes effort, work.  Work is hard. Today, I escorted sixth grade boys, members of the Headmaster’s Service Club, on their final visit to Cardinal Cooke.  They played trivia bingo and conversed, and shared stories with the residents. They worked hard.
The boys gave freely of their time to visit with the old, the sick and the infirm.  They exercised patience, kindness, gentleness, and a selflessness--all in the late afternoon, after school had closed for the day.  They have done this every month for a year.
If part of “the good” can be found in the virtue “charity” by way of “generosity,” then the sixth grade volunteer members of the HM Service Club have found this part of "the good" for sure; and they achieved it the hard way.  They worked for it.  Thank you boys for your exceptional, generous and noble service to our extended community.  We are all richer for it.

* History of the usage of 'generosity,' in part, from Wikipedia.